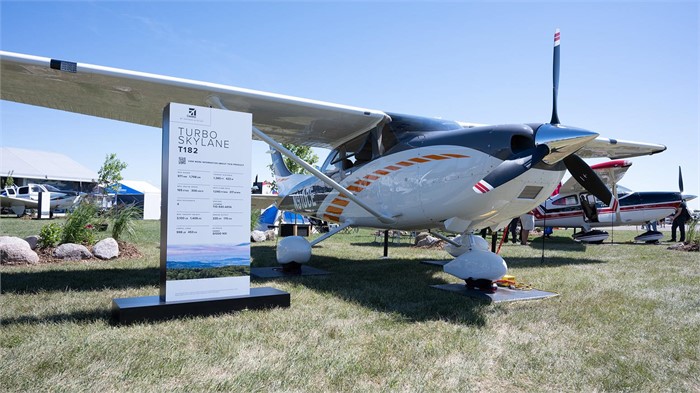 The Turbo Skylane T182T piston single aircraft, which Cessna re-introduced in February, was on display at the manufacturer’s booth at this week’s EAA AirVenture 2022 event in Oshkosh, Wisconsin. (Photo courtesy of Textron Aviation.)

Attending the EAA AirVenture 2022 air show this week in Oshkosh, Wisconsin? Make sure you stop by the Cessna booth for an up-close look at its newly re-introduced piston single-engine Turbo Skylane T182T. After pausing production in 2013, the Textron Aviation-owned company returned the four-passenger high-wing T182T to its lineup in February 2022 with a more powerful, turbocharged 235-horsepower (175-kilowatt) Lycoming TIO-540-AK1A engine. Cessna says the engine delivers optimal climb rates and faster cruise speeds, as well as enhanced utility for operations at high-altitude airfields. Deliveries are expected in early 2023.

Last year, Cessna celebrated the 65th anniversary of the venerable Skylane family. The company has delivered more than 23,000 Skylanes over the years to business travelers, flight schools, and other customers. Cessna originally unveiled the Turbo Skylane T182T variant in 2001, but paused production to focus on other product developments. 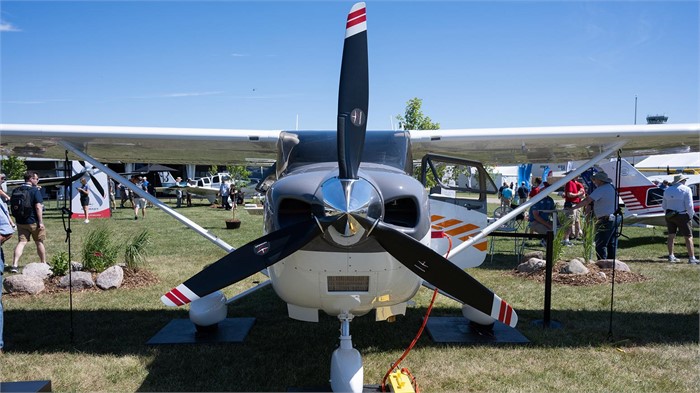 “Through our conversations with customers, many shared a desire for additional power for their unique missions,” said Lannie O’Bannion, Cessna senior vice president of sales and flight operations, in February. “The Turbo Skylane is a perfect solution. The turbocharger is easy to operate, and the combination of a proven Lycoming engine, a heated McCauley propeller, and an in-cabin oxygen system will make this aircraft a leader in the high-performance, single-engine segment.”

The plane’s beefed-up engine includes a Hartzell Engine Technologies turbocharger that maintains its 235-HP output to an altitude of 20,000 feet (6,096 meters). Cessna says the additional power proves particularly beneficial when crossing mountainous regions or cruising at higher altitudes. The aircraft can climb at 1,040 ft (317 m) per minute. It has a maximum cruise speed of 165 KTAS, and a maximum flight range of 970 nautical miles (1,796 kilometers). The plane can take off in less than 800 ft (244 m) while hauling all of its nearly 1,000-pound (453.5-kilogram) maximum useful load. 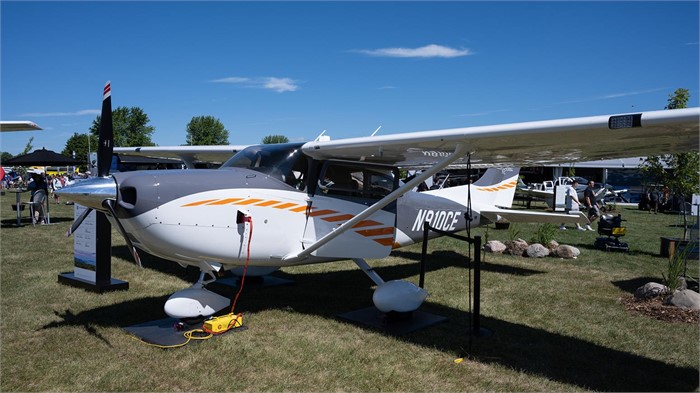 The Turbo Skylane has a 971-nautical-mile maximum range and a max cruise speed of 165 KTAS, and can take off in 775 feet. (Photo courtesy of Textron Aviation.)

Controller.com hosts listings for hundreds of new and used Cessna aircraft for sale , including a number of Skylane 182 and Turbo Skylane 182T models.