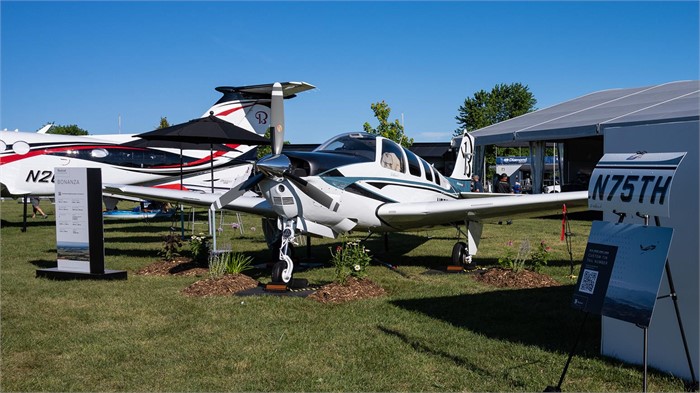 Textron Aviation is celebrating the 75th anniversary of the Beechcraft Bonanza this year with the release of a special-edition Bonanza G36, which is on display at the EAA AirVenture air show running through July 31. (Photo courtesy of Textron Aviation.)

If you’re an aviation history buff, you might know that this year marks the 75th anniversary of the iconic Beechcraft Bonanza, the industry’s longest-ever continuously produced aircraft. Beechcraft brand owner Textron Aviation is giving visitors to the Beechcraft booth at this week’s EAA AirVenture 2022 air show in Oshkosh, Wisconsin, the chance to view a special-edition, retro version of the Bonanza G36 piston single that’s available for a limited time to commemorate the milestone.

Textron drew inspiration for the limited-edition Bonanza G36’s design from Olive Ann Beech, who co-founded Beechcraft in 1932 with her husband Walter. She took over Beechcraft operations in 1950 after Walter’s death, making her the first woman to lead a major aircraft company. Beechcraft brought the Bonanza to market in 1947. Nearly 20,000 Bonanza aircraft have been delivered since. 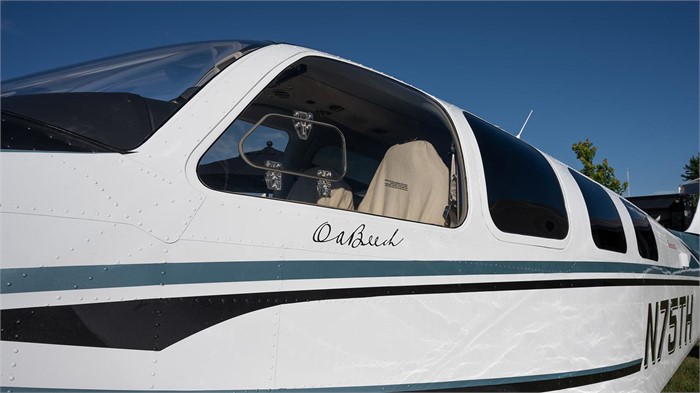 The special-edition Bonanza G36 also features Olive Ann Beech’s signature on the exterior and the Beechcraft “Bubble B” logo on the aircraft’s carpet entry. (Photo courtesy of Textron Aviation.)

The G36 on display at EAA AirVenture features the custom Mrs. Beech Blue color that Olive Beech adopted on advice from noted fashion designer Oleg Cassini. She wound up incorporating the color into everything from aircraft interiors and her automobile’s exterior to her dresses and office furnishings. The G36 also showcases the Beechcraft “Bubble B” logo that was registered in 1954 on the aircraft’s carpet entry. Additionally, Olive Beech’s personal signature is featured as a graphic above the cabin table and below the pilot window on the plane’s exterior.

The standard six-seat G36 can be configured with various options and is designed for business and recreational use. Beechcraft says the cabin is roughly a third larger than that of its nearest competitor. The plane comes with a Garmin G1000 NXi flight deck that includes a new GMC 707 autopilot control panel and new Garmin GI 275 electronic standby, which uses a modern touchscreen display but maintains a classic look for standby instruments. 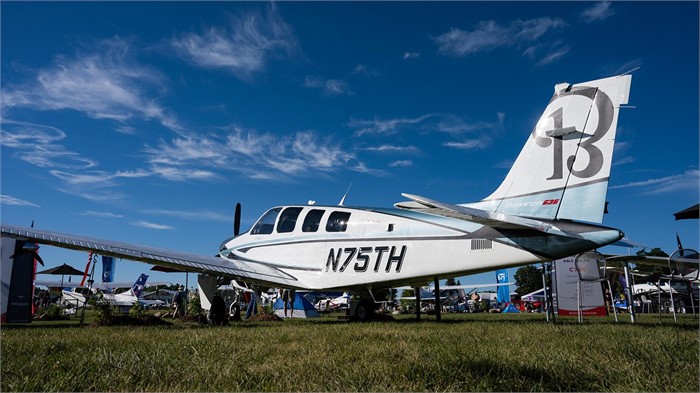 Find Your Next Beechcraft Aircraft

You’ll find hundreds of new and used Beechcraft aircraft for sale on Controller.com, including Bonanza 36 models like the G36.