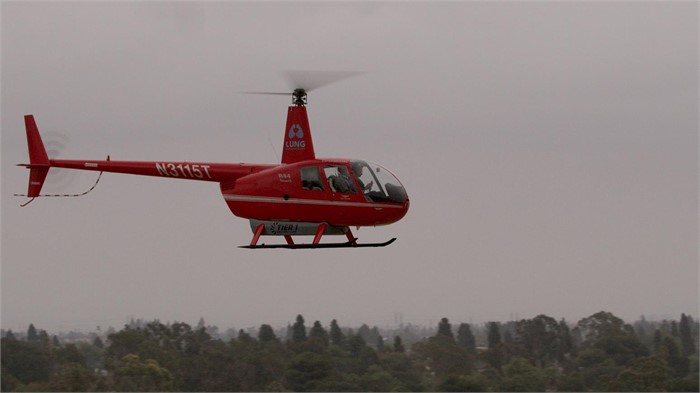 The first test flight of an all-electric Robinson R44 helicopter was completed on June 7 in California. The helicopter uses a battery system from Tier 1 Engineering and an electric propulsion unit from magniX. (Photo courtesy of magniX.)

“This historic flight of an all-electric helicopter with a certifiable electric engine was an important step toward obtaining aircraft certification,” says Tier 1 Engineering President Glen Dromgoole. “We are excited to expand the flight tests to greater distances and demonstrate safe, reliable, all-electric flight.”

Tier 1 has a flight test program underway for the all-electric R44, which uses its battery system. Tier 1 is working with the Federal Aviation Administration to obtain a supplemental type certification for the R44, magniX says. The helicopter’s first flight lasted about three minutes and took place at the Joint Forces Training Base in Los Alamitos, California.

“magniX has been powering all-electric aircraft since December 2019, and this flight represents another first for the company, as we have now electrified a rotary aircraft," says magniX CEO Nuno Taborda. "This landmark event demonstrates yet again magniX's commitment to lead the electrification of aviation by designing and delivering industry-leading products through smart innovation and customer centricity. This is a significant achievement that will lead to the sustainable delivery of life-saving organs."

There’s a big selection of new and used Robinson helicopters available for sale on Controller.com, including R44 piston and R66 turbine helicopters.