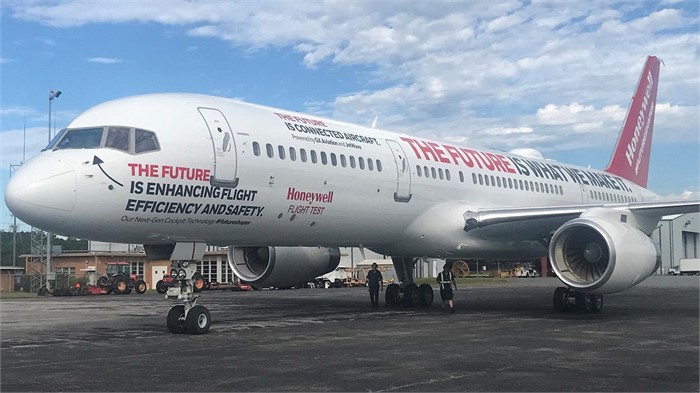 Turning 40 years old signals the beginning of middle age for most people, but when an aircraft turns 40 years old, that is a bigger milestone altogether. Most passenger aircraft are retired and scrapped by age 40, but for Honeywell's iconic Boeing 757 test aircraft, turning 40 simply means there is much more high-flying adventure to come.

Honeywell's Boeing 757-200 testbed has been utilized for research and development by the aerospace leader since it acquired the aircraft in 2005, but its history stretches back to when it rolled off the production line in June 1982. Thereafter, the aircraft entered service for Eastern Airlines in 1983. It was just the fifth 757 to roll off the assembly line, and more than 1,000 would eventually be produced. Although 757s are still in service at airlines around the world, many have been retired in recent years and replaced with newer aircraft.

Honeywell Aerospace's test flight department and engineers have utilized the 757 to test many of the technological advancements that the flying public enjoys today. From turbine engines to electrical and mechanical systems, to advanced avionics software and high-speed connectivity equipment, the 757 has touched a bit of everything in aerospace.

"For the past 17 years, we have made so many technological modifications to our beloved 757 test aircraft that the only thing turning 40 years old is likely the fuselage itself," said Captain Joe Duval, director, Flight Test Operations, Honeywell Aerospace. "We're among a select few pilots in the industry who have the responsibility to push an aircraft close to its limits. We've intentionally flown into nasty storms to test our radars, and we've flown toward more mountains than I can count to test our ground proximity warning systems. Our 757 has been the dependable workhorse that allows us to test a whole slew of technologies, including the engines we produce for business jets and smaller aircraft."

The pylon protruding from the fuselage of the 757 is likely its most noticeable characteristic. Although a third engine isn't always attached, the pylon allows Honeywell to test its turbojet and turbofan engines in real-world conditions and gather critical data that helps with engine development.

"The plane tends to draw a lot of attention, whether we're at an airshow with thousands of people or I'm scrolling through Twitter, and I notice a plane spotter that posted a photo of it," Duval said. "It has a special place in the AvGeek community, and I'm glad it does because it's helping create a more sustainable and digital future for aviation."

Although most 757s spend their life as a medium-haul aircraft shuttling about 200 people between a pair of destinations, Honeywell's testbed has only 25 seats to accompany a wide variety of flight test engineering stations. Despite the limited capacity, Honeywell's 757 is amazingly well-traveled. The test aircraft is likely the only existing 757 that has traveled to more than 30 countries across five continents. It has conducted more than 800 flight tests and clocked more than 3,000 flight test hours globally.

Technology that has been tested on Honeywell's 757 testbed includes:

Honeywell has no plans to retire the 757 test aircraft and will continue to push the technological boundaries in the aviation industry, thus enabling a safer and more comfortable flight experience for airline passengers.

You’ll find a variety of new and used Boeing aircraft for sale at Controller.com, including listings for Boeing 757 jets.