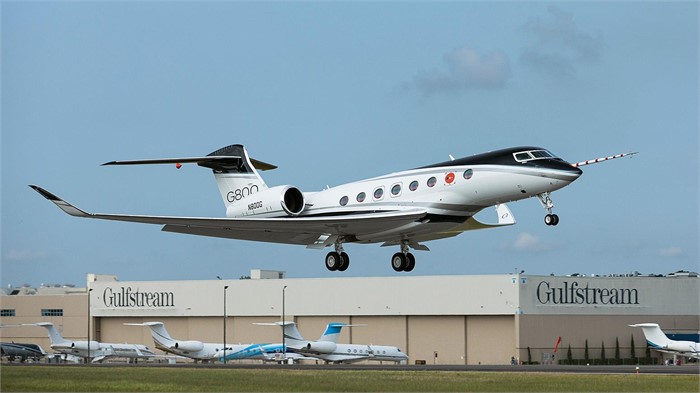 Gulfstream Aerospace officially launched the flight test program for its all-new Gulfstream G800 business jet on June 28 with the successful completion of the 19-passenger aircraft’s first flight that morning. Gulfstream unveiled the “ultra-long-range” jet in October 2021 alongside the all-new G400 large-cabin executive jet. It says the G800 offers business aviation’s longest range, at 8,000 nautical miles (14,816 kilometers) at Mach 0.85. At Mach 0.90, the G800’s range is 7,000 nm (12,964 km); the jet has a maximum speed of Mach 0.925. G800 deliveries are expected to begin in 2023.

“We have announced eight new aircraft in the past decade, strategically timed to capture market demand,” says Gulfstream President Mark Burns. “We are seeing great interest in the G800, and this first flight brings us even closer to delivering a Gulfstream for every mission.”

The G800’s maiden flight began and ended at Savannah/Hilton Head International Airport in Savannah, Georgia, and lasted two hours. The aircraft used a blend of sustainable aviation fuel (SAF). It’s worth noting that Gulfstream says the G800’s range comes with class-leading fuel-efficiency due to its advanced high-speed wing and all-new, high-thrust Rolls-Royce Pearl 700 engines. Additionally, the manufacturer says the G800 will link passengers to more nonstop destinations around the world than any other business aircraft, and will save travelers up to 1.5 hours on flights surpassing 6,500 nm (12,038 km).

“At Gulfstream, working closely with our customers allows us to continuously build on our successes and develop aircraft that exceed their expectations,” Burns says. “The G800 pushes the boundaries of performance even further with Gulfstream-designed aerodynamics and cabin technology, and we look forward to our customers benefiting from the longer range at higher speeds in our exceptional cabin environment.”

The G800 can be configured for either four living areas or three living areas with a crew compartment. The cabin includes hand-crafted, ergonomic seats and 16 of the industry’s largest oval windows. Passengers will also benefit from a high-definition circadian lighting system, 100% fresh air that’s never recirculated, and a plasma-ionization air purification system. Gulfstream says the G800 also has the industry’s lowest cabin altitude and business aviation’s quietest cabin.

Find Your Next Gulfstream Jet

Controller.com is where you’ll find a big selection of new and used Gulfstream aircraft for sale, including business jets like the GV, G200, G450, G550, and G650ER.