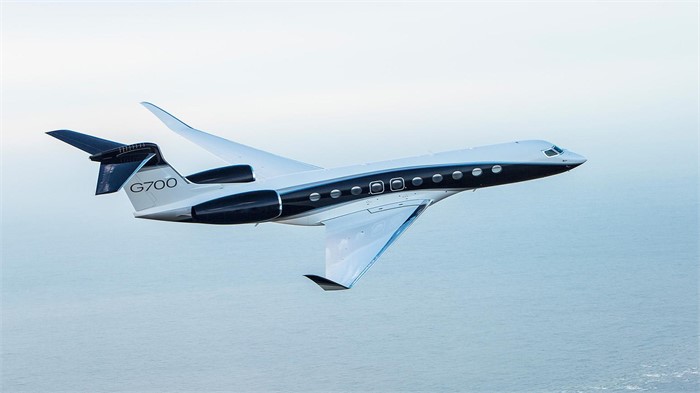 Gulfstream recently announced that it has used a sustainable aviation fuel (SAF) blend on 83% of the test flights it has conducted for its upcoming flagship G700 business jet, which is expected to be available in the fourth quarter of 2022. (Photo courtesy of Gulfstream.)

Since Gulfstream Aerospace completed the first test aircraft flight for its upcoming flagship G700 business jet in February 2020, aircraft from the flight test program have gone on to establish several city pair speed records. Now, Gulfstream is ending 2021 by announcing that it used a sustainable aviation fuel (SAF) blend on 83% of test flights the G700 has made from the Gulfstream Flight Test Center located in Savannah, Georgia.

“Getting this amazing aircraft in front of customers has been one of the highlights of 2021,” says Gulfstream President Mark Burns. “We are also further demonstrating our commitment to SAF by using the fuel blend as much as possible on G700 test flights—five out of six test aircraft have used the fuel blend on every flight. We look forward to building on these successes in 2022 and accomplishing even more program milestones as we move closer to customer deliveries.”

The all-new G700 is set for delivery in fourth quarter of 2022. Gulfstream introduced the 19-passenger aircraft in October 2019, and flew a fully outfitted production test aircraft for the first time in April 2021. G700 test aircraft have set city pair speed records during international trips that involved using a combination of SAF and carbon offsets from the United States to Paris; Doha, Qatar; and Riyadh, Saudi Arabia, where Gulfstream showcased the G700 to potential customers.

In addition to using SAF and promoting its safety and performance benefits, Gulfstream supports industry efforts to decrease carbon emissions by providing SAF to customers to use. Gulfstream was also the first business aviation maker to sign the World Economic Forum’s Clean Skies for Tomorrow 2030 Ambition Statement, and has purchased over 1.6 million gallons (more than 6 million liters) of the SAF blend for company and customer use to date.

The G700 has an impressive feature list that includes its all-new Rolls-Royce Pearl 700 engines and Symmetry Flight Deck, which features active-control sidesticks, touchscreen avionics, and Phase-of-Flight technology. The G700’s all-new cabin is billed as the industry’s most spacious, innovative, and flexible; it features up to five possible living areas, 20 panoramic oval windows, a “true circadian” lighting system, Jet ConneX Ka-band Wi-Fi connectivity, and what Gulfstream says is the only ultra-galley with 10 feet (3 meters) of counter space. The jet has a 7,500-nautical-mile (13,890-kilometer) flight range, a maximum speed of Mach 0.925, a Mach 0.90 high-speed cruise speed, and a long-range cruise speed of Mach 0.85.

You’ll find a big selection of new and pre-owned Gulfstream business jets for sale on Controller.com, including G200s, G450s, G550s, and G650ERs.