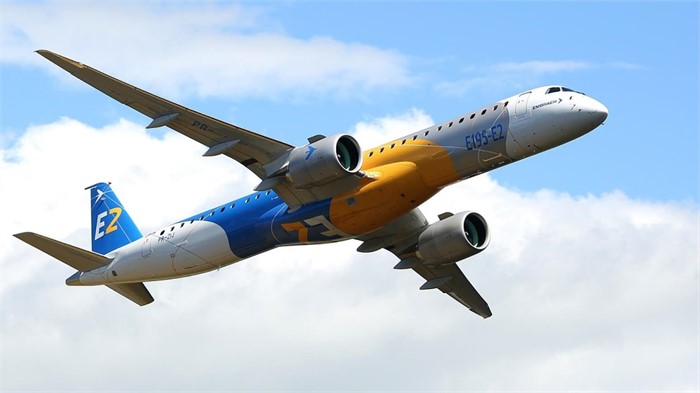 Embraer recently announced that it has signed a memorandum of understanding with Pratt & Whitney to collaborate on studies of 100% Sustainable Aviation Fuel (SAF). Technical teams from the two companies will engage to define an integrated ground and flight test plan for 100% SAF in a GTF-powered Embraer E195-E2 aircraft.

The initiative reflects Embraer´s and Pratt & Whitney’s shared commitment to supporting the aviation industry’s ambitious environmental goals, including the goal of reaching net zero CO2 emissions for air travel by 2050. Alongside efforts to continually improve aircraft and engine efficiency, SAFs have a critical role to play towards decarbonizing air travel, by reducing dependence on fossil-based fuels.

SAFs are manufactured from renewable feedstocks, such as used cooking oil or municipal solid waste, and may reduce life cycle CO2 emissions by up to 80% relative to fossil-based jet fuel. Today, technical standards devised by ASTM International allow aircraft to operate with SAF at blends of up to 50% with kerosene. Collaboration among OEMs, fuel providers, and regulators, will enable new standards to certify operation with 100% SAF.

“We are committed to continually enhancing the efficiency and performance of our products, and by further extending their compatibility with SAF, we will enable our customers to operate as sustainably as possible,” said Arjan Meijer, President and CEO, Embraer Commercial Aviation. “Embraer has a recognized track record of innovation in sustainable fuels, which includes the industry's first certified ethanol-powered aircraft in 2004, and collaboration is an essential prerequisite for our industry to achieve our environmental goals. We are delighted to partner with Pratt & Whitney towards this critical task of enabling aircraft operation with 100% SAF.”

“Pratt & Whitney has been active in SAF testing and certification for almost two decades. We will strategically continue to support 100% SAF flight tests for key customers that expand SAF uptake, including partnering with Embraer to test the E-Jets E2 aircraft on 100% SAF as part of their 2050 net zero emissions target,” said Graham Webb, Chief Sustainability Officer at Pratt & Whitney. “Through our constant pursuit of more efficient aircraft propulsion technologies, we are determined to support our customers in achieving their goal of net zero CO2 emissions by 2050, and will ensure that our engines will be ready for operation with 100% SAF.”

You’ll find a big selection of new and pre-owned Embraer aircraft for sale on Controller.com, including Phenom and Legacy business jets and more.