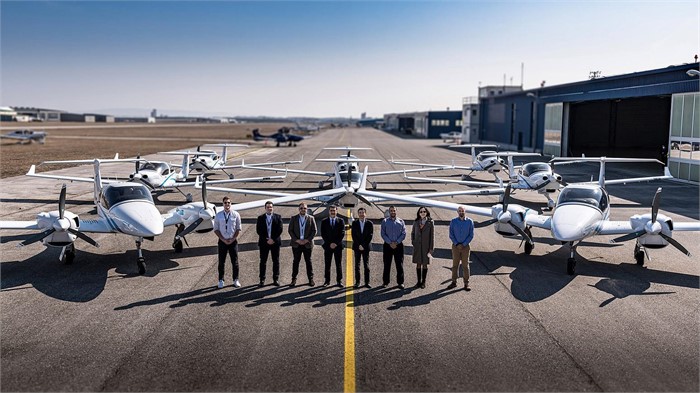 “We are very glad to have the Diamond aircraft and the Diamond simulator at our facility in Oman,” says OAA CEO Capt. Abdullah Al Bulushi. “At OAA, we are committed to adhere to the highest quality and safety in the aviation training industry. Our partnership with Diamond Aircraft by using their top-of-the-line training aircraft and simulator will definitely support OAA to accomplish its mission to provide the airline industry with the next generation of highly qualified aviation professionals.”

The all-composite DA40-NG is a member of Diamond Aircraft’s DA40 Series, which Diamond says is well-suited to travel, training, and leaseback applications. The DA40 NG has a 940-nautical-mile (1,740-kilometer) flight range, a maximum operating altitude of 16,400 feet (4,876 meters), a 1,984-pound (900-kilogram) empty weight, and 904-lb (410-kg) useful load. The airplane is equipped with a Garmin G1000 NXi flight deck and is powered by a 168-horsepower (125-kilowatt) Austro AE300 jet-fuel turbocharged 2.0-liter diesel engine with a single-lever electronic engine control unit.

You’ll find a big selection of new and used Diamond aircraft for sale every day on Controller.com, including DA40 and DA42 aircraft like the DA40NG and the DA42-VI.