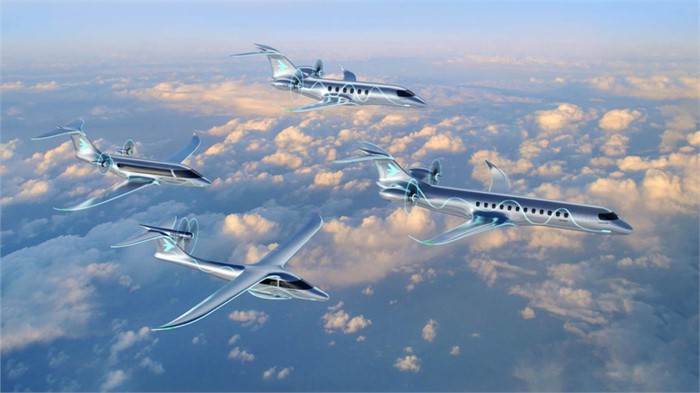 Embraer recently introduced the Energia family of concept aircraft, each of which uses a different propulsion technology, including hybrid-electric, electric propeller, electric engine, and hydrogen or SAF/Jet A turbine implementations. (Image courtesy of Embraer.)

To help the aviation industry reach its goal of zero carbon emissions by 2050, executive jet and commercial aircraft manufacturer Embraer has introduced the Energia family of four concept aircraft, each built around the use of a different propulsion technology. The Brazilian aircraft manufacturer has set technology readiness dates for the aircraft that range from 2030 to 2040. Concepts include the nine-seat Energia Hybrid E9-HE, the nine-seat Energia Electric E9-FE, the 19-seat Energia H2 Fuel Cell E19-H2FC, and the 35- to 50-seat Energia H2 Gas Turbine E50-H2GT.

Energia is part of Embraer’s Sustainability in Action initiative, through which it’s working with various international entities to develop energy harvesting, storage, and thermal management techniques for sustainable aircraft propulsion.

“We see our role as a developer of novel technologies to help the industry achieve its sustainability targets,” says Luis Carlos Affonso, Embraer senior vice president of engineering technology and corporate strategy. “There’s no easy or single solution in getting to net zero. New technologies and their supporting infrastructure will come online over time. We’re working right now to refine the first airplane concepts, the ones that can start reducing emissions sooner rather than later.”

“We will see a big transformation in our industry towards a more sustainable aviation,” says Embraer Commercial Aviation President and CEO Arjan Meijer. “With 50 years’ experience in developing, certifying, and supporting regional aircraft, Embraer is in a unique position to make viable the introduction of new disruptive green technologies.” 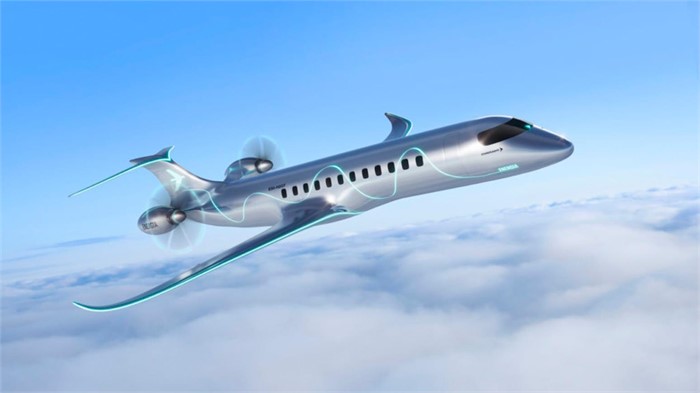 The Energia H2 Gas Turbine E50-H2GT will seat 35 to 50 passengers, use hydrogen or SAF/Jet A turbine propulsion, and have a 350- to 500-nautical-mile flight range. (Image courtesy of Embraer.)

The E9-HE will rely on hybrid-electric propulsion as generated by rear-mounted engines. Embraer says it will reduce CO2 emissions by up to 90%, cut external noise by 60%, and will have a 500-nautical-mile (926-kilometer) flight range; the manufacturer says it has a 2030 readiness date. The E9-FE will be equipped with an aft contra-rotating propeller. It will achieve zero CO2 emissions, produce 80% less noise, and have a 200-nm (370.4-km) range, and has a 2035 date. The E19-H2FC is also slated for 2035 and will incorporate rear-mounted electric engines. It will achieve zero C02 emissions, generate 70% less noise and have a 200-nm range. The E50-H2GT will be equipped with rear-mounted engines, will produce zero CO2 emissions and 60% lower noise using hydrogen or SAF (sustainable aviation fuel)/Jet A turbine propulsion, and will have a 350- to 500-nm (648.2- to 926-km) flight range. Embraer says it has a readiness date of 2040.

Embraer is now evaluating the concept aircraft for technical and commercial viability. The company’s other sustainability efforts include testing drop-in SAF, mixes of sugarcane and camelina plant-derived fuel, and fossil fuel on E-Jet models. Embraer plans to have all its aircraft SAF-compatible by 2030. Other projects have included flying a single-engine EMB-203 Ipanema Electric Demonstrator in August 2021. The aerospace firm is also targeting a hydrogen fuel cell demonstrator for 2025, and is developing a fully electric, zero-emission eVTOL (electric vertical takeoff and landing) vehicle with a scheduled entry into service in 2026.

Controller.com is the aviation industry’s leading source for new and pre-owned Embraer aircraft for sale, including Phenom and Legacy business jets.