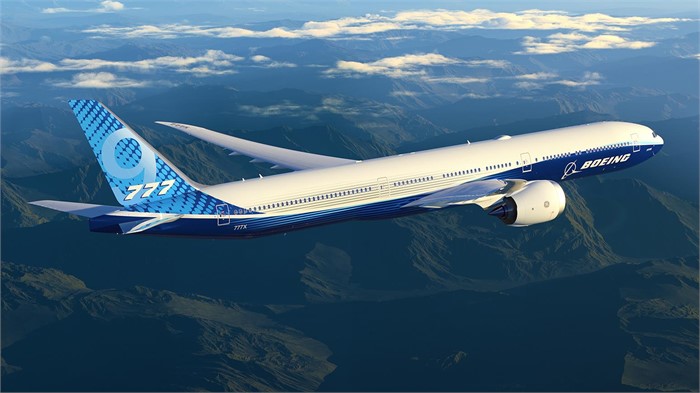 Boeing’s 777-9 flight test aircraft will participate in the Dubai Airshow’s flying program and will appear in the company’s static display. (Photo courtesy of Boeing.)

Boeing recently announced that the international debut of its new 777X widebody jet will take place at the 2021 Dubai Airshow, to be held November 14 to 20. Boeing will also showcase its commercial, defense, and service products, including the ecoDemonstrator 737-9, an Etihad Airways 787-10 Dreamliner, a flydubai 737 MAX 9, a KC-46A Pegasus, a P-8 Poseidon, and an MV-22 Osprey.

A Boeing 777-9 flight test aircraft will participate in the air show’s flying program and appear in Boeing’s static display. Boeing says the 777-9 will be the world’s largest and most efficient twin-engine jet with 10% improvements in fuel economy, exhaust emissions, and operating costs vs. competing jets. Also on the static display will be the 2021 Boeing ecoDemonstrator, an Alaska Airlines 737-9 that is flight testing approximately 20 technologies aimed at reducing fuel consumption, emissions, and noise, as well as improving safety. The aircraft manufacturer will also discuss its parts, modifications, digital, sustainment, and training solutions, including an expansive global supply chain, maintenance, and logistics network.

Boeing collaborations will be on display, as well. Etihad Airways will have a 787-10 Dreamliner as an example of sustainable aviation. Etihad has been researching and testing technologies, products, and practices on its fleet of 787s to further reduce carbon emissions. The region’s largest 737 operator, flydubai, will have a 737 MAX 9 at the air show that reduces fuel use and emissions by 14% compared to predecessors.

"Boeing is excited to participate fully in the Dubai Airshow, the first global air show in almost two years, and to be able to engage directly with customers, partners, suppliers and other stakeholders from the region and beyond," says Kuljit Ghata-Aura, president of Boeing Middle East, Turkey, and Africa. "The show is a perfect opportunity to come together and remind the world of the importance of our industry and discuss technology and innovations that are critical to advance a more sustainable aerospace industry over the long term."

You’ll find a large selection of new and pre-owned Boeing aircraft for sale on Controller.com.