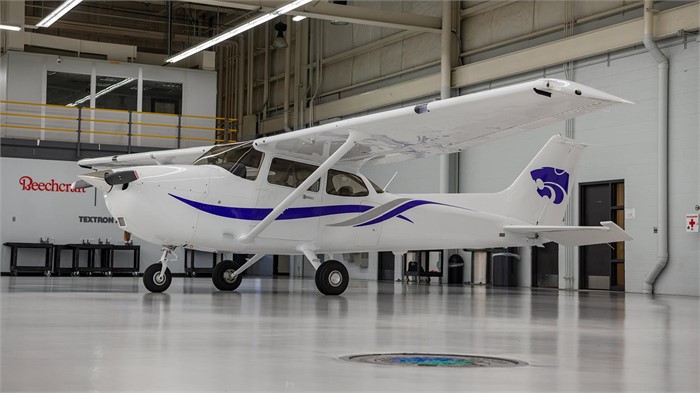 Textron Aviation has announced that it will begin delivering the first of 10 new Cessna Skyhawk piston singles to the Kansas State University Salina Aerospace and Technology Campus beginning in first-quarter 2022. The university’s order will push its Skyhawk fleet to 20 aircraft and will help meet growing enrollment in its pilot training programs. Located just north of Textron Aviation headquarters in Wichita on Interstate 135, K-State Salina was one of the initial universities to take part in Textron’s Top Hawk program that enables schools to fly custom-branded Skyhawks for flight training and promotional purposes.

In 2019, Textron Aviation delivered five new Skyhawks to K-State Salina to help it modernize its training aircraft fleet. Textron Aviation says the school has been using Skyhawks to train future pilots since the program began in 1987. The manufacturer’s relationship with K-State Salina is a key component in its own efforts to support training and development of new pilots. The university says the new Skyhawks will help it meet its industry- and student-related goals.

“The addition of these aircraft is a major step toward our vision to meet industry demands by providing students experience from a primary trainer all the way to a business-class airplane," says K-State Salina CEO and Dean Alysia Starkey.

In June 2020, Textron Aviation celebrated the 65th anniversary of the Skyhawk’s first flight in 1955. The high-winged Skyhawk has been a long-time favorite of flight schools and academies the world over. Textron Aviation claims it has delivered more than 45,000 Skyhawks worldwide, more deliveries than any other aircraft.

The plane comes in three-seat training and four-seat configurations. In addition to Garmin G1000 NXi avionics, it provides wireless connectivity, a standard angle-of-attack display system, large wraparound windows, LED lighting in the cabin, and dual USB ports in the cockpit. The Skyhawk’s Lycoming piston engine is rated for 180 horsepower (134 kilowatts) and powers the Skyhawk to a 640-nautical-mile (1,185-kilometer) range and a maximum cruise speed of 124 ktas (230 km/h).

Controller.com is where buyers and sellers in the aviation industry turn for new and used Cessna aircraft for sale, including 172 Skyhawks.