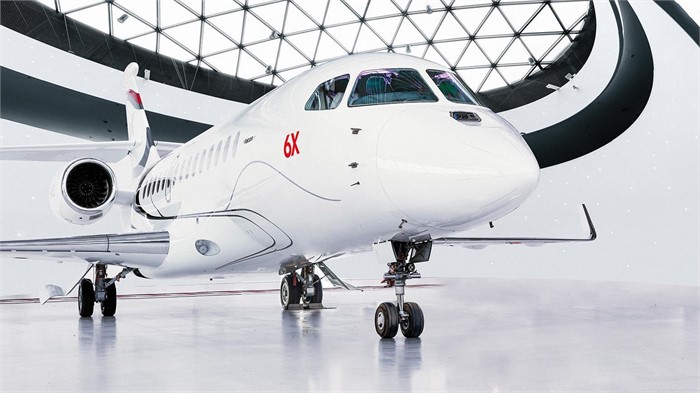 Dassault Aviation recently announced that it has entered aircraft No. 4 into the test program for its upcoming Falcon 6X executive twin-jet model, and the aircraft will embark on a world tour in mid-2022. (Photo courtesy of Dassault Aviation.)

Dassault Aviation announced earlier this week at the National Business Aviation Association Business Aviation Convention & Exhibition (NBAA-BACE) in Las Vegas that it’s equipping aircraft No. 4 in the test program for its upcoming extra-widebody Falcon 6X executive jet model with a full interior. Dassault will use the test plane to demonstrate the operational maturity of the aircraft’s systems. Dassault also announced the aircraft will depart on a world tour in mid-2022. The aerospace company has set a timeline of early next year to deliver initial green aircraft to its competition facility in Little Rock, Arkansas. The jet is to enter service next year.

“There is still considerable test activity to be completed, as in any test campaign,” says Dassault Aviation Chairman and CEO Eric Trappier. “But we can report at this point that we are achieving milestones at a pace that our test engineers are really happy with.”

Since introducing the all-new Falcon 6X in 2018, Dassault has said the 16-passenger jet will create a new benchmark in the long-range, large aircraft segment. Prior to the May 2021 introduction of its upcoming Falcon 10X ultra-long-range executive model, the 6X featured the market’s largest cabin cross section. The 6X’s cabin measures 40.4 feet (12.3 meters) long by 6.5 ft (1.98 m) high by 8.5 ft (2.59 m) wide.

The twin-jet Falcon 6X successfully completed its maiden flight in March 2021 at Dassault’s Mérignac facility in France. Three 6X test aircraft are now each flying two or three times weekly for several hours per flight. Aircraft No 3. is equipped with a full cabin, and is being used for testing acoustic and thermal performance, evaluating cabin pressurization, and measuring airflow as it relates to passenger comfort. Dassault says its engineers are confident the 6X will achieve noise levels on par with its Falcon 8X, which it claims provides business aviation’s quietest levels. The 6X will also provide a cabin altitude as low as 3,900 ft (1,188.7 m) at a cruise altitude of 41,000 ft (12,496.8 m). Dassault had full-scale cabin mockups for both the 6X and 10X on display at NBAA-BACE. 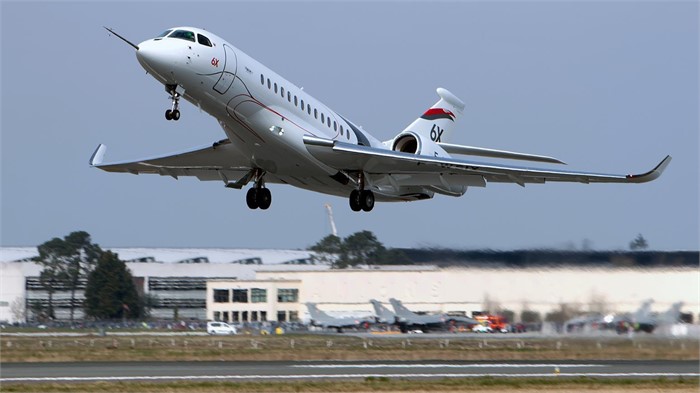 Dassault Aviation says the PW812D engine from Pratt & Whitney Canada that the Falcon 6X has completed all certification testing, and that Transport Canada is busy conducting final reviews of the power plant. (Photo courtesy of Dassault Aviation.)

Dassault also announced this week that Pratt & Whitney Canada has entered the final stages toward certifying the 6X’s PW812D engines. Pratt & Whitney Canada has completed all certification testing, and Transport Canada is conducting final reviews. Certification is expected soon, Dassault says. When it enters service, the 16-passenger 6X will provide a 5,500-nautical-mile (10,186-kilometer) range and a top speed of Mach 0.90. The aircraft will support end-of-mission approach speeds as low as 109 knots, and be able to fly into and out of small airports with runways measuring 4,000 ft (1,219.2 m) or less.