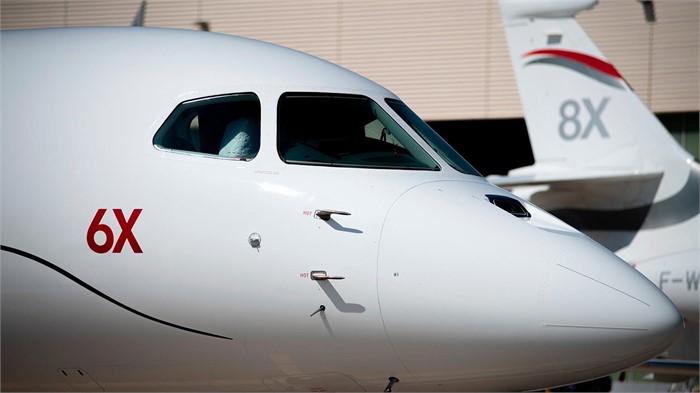 “We are investing considerable talent and resources in developing new capabilities for long-range travelers,” says Dassault Aviation Chairman and CEO Eric Trappier. “Operators will be excited to see exactly what this is going to mean for the onboard flying experience.”

Billed as the market’s largest and most advanced purpose-built business jet, the all-new Falcon 10X was introduced in May 2021, and is set to enter service in 2025. At NBAA-BACE, Dassault will display a full-scale 10X cabin mockup for the first time. Measuring 6.7 feet (2 meters) high and 9.1 ft (2.8 m) wide, the cabin is larger than some regional jets’, Dassault says, which allowed the interior design teams to “imagine a cabin environment more characteristic of a posh penthouse apartment than a leading high-end business aircraft.”

The cabin provides space for up to four zones with plenty of customization options, including an expanded dining/conference area or a master suite with private, stand-up shower. The jet is powered by new Rolls Royce Pearl 10X engines and comes equipped with Dassault’s new neXus flight deck; it has a 7,500-nautical-mile (13,900-kilometer) range and a Mach 0.925 maximum cruise speed.

Dassault expects the Falcon 6X, which it claims is the first ultra-widebody business jet, to receive type certification next year. Although Dassault introduced the aircraft in 2018 and completed its first test flight in March 2021, the 6X has already begun winning awards, including a 2020 International Yacht & Aviation Award for interior design and a 2021 Red Dot: Best of the Best award for its premium cabin design. A fourth test aircraft with full interior is to fly before year’s end, and then depart on a global promotional tour.

Controller.com is where you’ll find a big selection of new and used Dassault Aviation business jets for sale, including Falcon 7Xs, 8Xs, 50s, 900s, and 2000s.