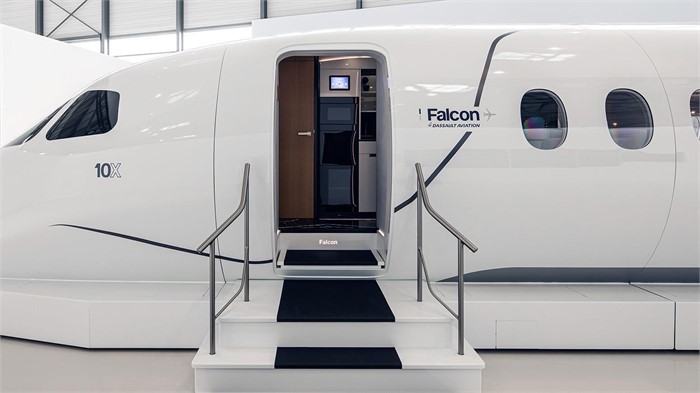 This week is a big one for French aerospace firm Dassault Aviation, makers of the upcoming Falcon 10X ultra-long-range business jet. The company has a full-scale cabin mockup for the 10X (and another for the upcoming Falcon 6X) now on display at the National Business Aviation Association Business Aviation Convention & Exhibition (NBAA-BACE) running through tomorrow (October 14) in Las Vegas. Dassault has also provided some program updates for the 10X, announcing that it will complete a detailed design for the aircraft before year’s end.

Billed as the industry’s largest and most advanced business jet, the Falcon 10X will have a 7,500-nautical-mile (13,900-kilometer) range at Mach 0.85 and a top speed of Mach 0.925. The aircraft will be powered by Rolls-Royce Pearl 10X engines, each of which is rated for in excess of 18,000 pounds of thrust. Rolls-Royce is now assembling modules for the first Pearl 10X test engines at its aviation engine facility near Berlin, with an initial test run set for 2022. 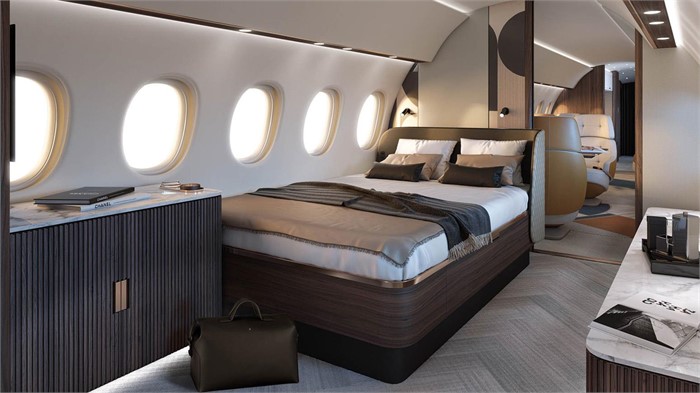 Following NBAA-BACE, Dassault will keep the 10X cabin mockup stateside for individual customer tours. A second mockup will be available at the company’s Paris-Le Bourget showroom. Described as a “flying penthouse,” the cabin section is larger than those of some regional commercial jets, Dassault says. The cabin is nearly 8 inches (20 centimeters) wider and 2 in. (5 cm) taller than today’s widest and tallest competing business jet, it says.

The cabin of the 10X, measuring 6.8 feet (2.07 meters) high by 9.1 ft (2.8 m) wide by 53.10 ft (16.2 m) long, provides ample customization options for its four zones. Customers can, for example, specify an expanded dining/conference area, a dedicated entertainment area with large-screen monitor, a private stateroom with a fixed queen-size bed, or a master suite with a private stand-up shower. The interior also features 38 of the largest windows of all Falcon jets. Customers can also expect an unprecedented cabin-filtration system, state-of-the-art connectivity featuring Ka-band networking and the FalconConnect system, and sound levels comparable to the Falcon 8X’s—the quietest cabin in business aviation, Dassault claims. 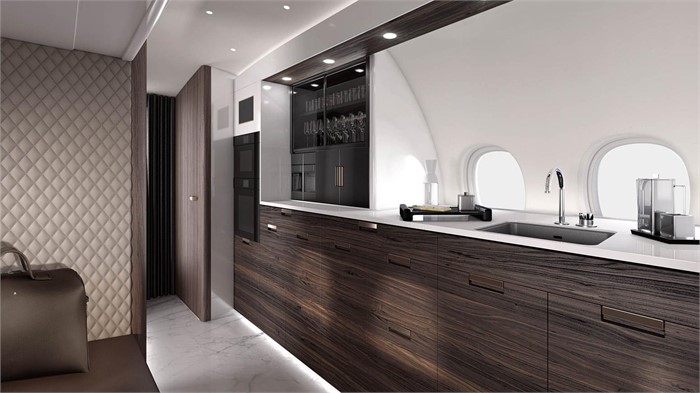 The cabin of the Falcon 10X will be highly customizable, with four zones and a wealth of specification options including a master suite with private stand-up shower. (Photo courtesy of Dassault Aviation.)

“The Falcon 10X is not just another intercontinental contender, it’s in a league of its own and has to be experienced firsthand to be fully appreciated,” says Dassault Aviation Chairman and CEO Eric Trappier. “Because of its sheer size and imaginative layout, you’ll move about this cabin differently, much more easily, than in any competing business jet. The 10X will provide the ultimate in privacy and in collaborative workspace—indeed, it will be able to provide both at the same time.”