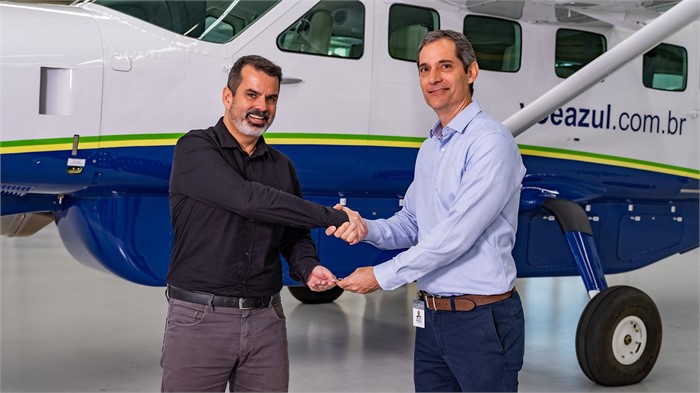 Textron Aviation recently delivered the first two of what could end up being 10 Cessna Grand Caravan EX single-engine turboprops to Azul Conecta, a Brazilian aviation company with a fleet that currently includes 18 Caravan turboprops. A subsidiary of Azul Airlines, Azul Conecta will use the planes to transport travelers from smaller cities and remote locations throughout Brazil, helping to expand the country’s regional connectivity services. The carrier placed an initial order of five Grand Caravan EXs, and has options to purchase another five. Three more deliveries are expected through early 2022.

“The Caravan platform provides a valuable form of transportation throughout Brazil, especially for people in rural areas,” says Textron Aviation Vice President of Latin America Sales Marcelo Moreira. “It’s a proven and versatile platform in Latin America, flying passengers, cargo, or both. With its combination of performance and rugged reliability, the Grand Caravan EX is capable of reaching remote areas that other aircraft cannot; connecting many people throughout the region and supporting the development and economic growth of the country.”

“From August 2020 until now, we have already transported more than 40,000 customers, opened 12 new destinations, and completed more than 15,000 flight hours,” says Azul Conecta CEO Flavio Costa. “However, we are growing, and the announced purchase of new planes coming from the factory is a demonstration that we are expanding our operations in the country. Azul Conecta is already a great success in the interior cities and, connecting with Azul Airlines, we will reach the milestone of 200 cities served in Brazil in the coming years.”

Textron Aviation has delivered more than 2,900 aircraft from the Caravan platform worldwide. Caravans are certified in 100 countries, and have completed roughly 24 million flight hours. The Grand Caravan EX is powered by a single Pratt & Whitney Canada PT6A-140 engine and includes a Garmin G1000 NXi avionics suite. The plane has a 912-nautical-mile (1,689-kilometer) flight range, a maximum cruise speed of 185 ktas, a 3,532-pound (1,602-kilogram) useful load, and a 1,410-lb (640-kg) baggage capacity.