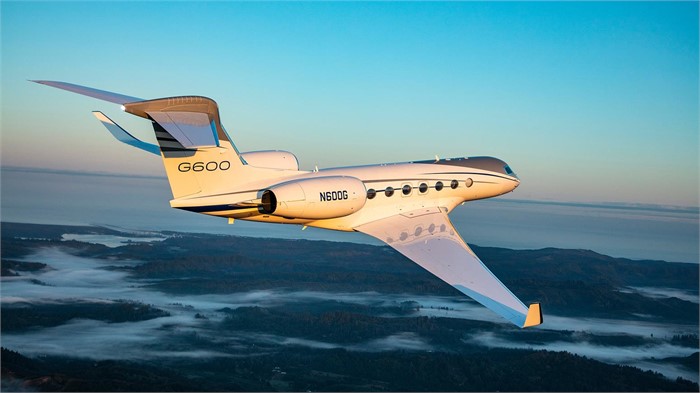 An undisclosed North American customer recently became the recipient of the 50th Gulfstream G600 built thus far. The next-generation, 19-passenger business jet was introduced in 2014 with a clean-sheet design, and was entered into service in August 2019. (Photo courtesy of Gulfstream.)

Gulfstream Aerospace’s G600 executive jet keeps racking up achievements. This week, Gulfstream delivered its 50th G600, sending the next-generation aircraft to an undisclosed North American customer. Gulfstream introduced the G600 in 2014 along with the G500. The latter entered service in 2018, and the G600 in August 2019. In April 2021, Gulfstream announced 100 combined G500 and G600 deliveries. The business jets have already established a combined 60-plus city pair speed records, with more than 20 set by the G600.

Both the G600 and G500 seat up to 19 passengers, both feature a clean-sheet design and are powered by Pratt & Whitney 800-series engines, and both have what Gulfstream refers to as “the industry’s most advanced wings.” Built from a single piece of aluminum, the wings help significantly reduce drag, Gulfstream says. The manufacturer also claims the G600’s PW815GA engines generate 27% lower nitrogen oxide emissions than current international requirements, as well as 75% improved carbon monoxide, hydrocarbons, and smoke emissions.

“With every new customer delivery, operators around the world are experiencing the tremendous benefits of the G600,” says Gulfstream President Mark Burns. “The G600 dominates the sweet spot of range, speed, cabin comfort, and fuel efficiency, and overwhelming market enthusiasm is exceeding even our own high expectations.”

The G600 and G500 are the first business or commercial aircraft to receive Stage 5 noise standard certification, Gulfstream says. The G600 is significantly quieter than current limits, it notes, enabling the jet to greatly reduce sound-related impacts on communities located near airports. The G600 is also built for comfort and flexibility. Its cabin features up to three living areas and a crew compartment or four living areas, and provides 14 windows, 100% fresh air, and industry-low cabin altitude. The cabin won Gulfstream a Private Jet Design award in the 2018 International Yacht & Aviation Awards.

Controller.com is where you’ll find a big selection of new and used Gulfstream aircraft for sale, including G500s and G600s.