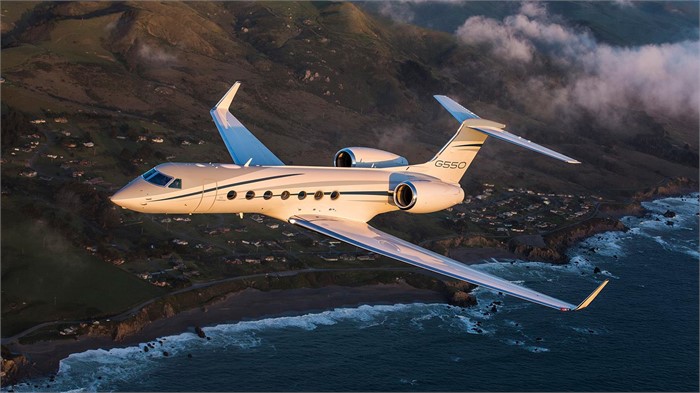 Gulfstream Aerospace recently completed the final commercial delivery of its G550 large-cabin twinjet in late June to an international customer. Gulfstream introduced the G550 in 2003 and delivered more than 600 units over the years. (Photo courtesy of Gulfstream.)

Gulfstream Aerospace says that a recent delivery to an undisclosed international customer will be the final commercial delivery of its Gulfstream G550 large-cabin business jet. Introduced in 2003, the G550 has set more than 55 speed-related records over the years and earned a Robert J. Collier Trophy for its technological and safety innovations. Gulfstream says it will continue to support in-service G550s through its Gulfstream Customer Support network.

Gulfstream says there are more than 600 G550s still in service worldwide. In addition to serving business aviation customers, the G550 has been available in configurations designed for special government and even military missions. The aerospace company says the ultra-long-range jet is one of the most dependable business jets in use.

“For nearly two decades, the G550 has been exceeding customer expectations,” says Gulfstream President Mark Burns. “The G550 set a new standard for performance and reliability and continues to outperform and impress with its wide-ranging capabilities.”

Upon its release, the G550 introduced the Gulfstream PlaneView flight deck, and was certified with the safety-enhancing Enhance Vision System, now known as the Enhance Flight Vision System (EFVS), which was a standard inclusion. Able to seat as many as 19 passengers, the G550 features up to four configurable living spaces. That combines with a 6,750-nautical-mile (12,500-kilometer) flight range and top speed of Mach 0.885. The jet is equipped with two high-thrust Rolls-Royce BR710 engines.

With G550 deliveries at an end, Gulfstream’s active fleet now includes the G280, G650, and G650ER (extended range), as well as the all-new and clean-sheet G500, G600, and upcoming G700 flagship aircraft that’s expected to enter service next year.

Controller.com has a big selection of new and used Gulfstream airplanes for sale every day, including a number of G550s, G200s, G280s, and G450s.