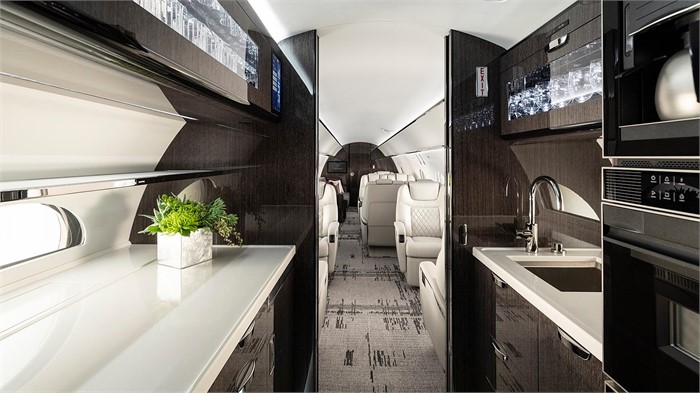 Gulfstream Aerospace has expanded completions operations at its Dallas facility to include large-cabin interior outfitting abilities for its G600 business jet. The aircraft manufacturer also announced that Melissa Grant, director of completions operations at Gulfstream’s Savannah, Georgia, facility, will relocate to Dallas to assume vice president and general manager roles there.

Gulfstream introduced the 19-passenger G600 in 2014 alongside the G500. The aerospace company delivered the first G600 in August 2019, and this year in April announced 100 combined deliveries for both jets. The G600’s interior earned Gulfstream the top Private Jet Design honor in the 2018 International Yacht & Aviation Awards. Customers can configure the aircraft’s cabin with up to four living areas or three living areas with a crew compartment. Gulfstream President Mark Burns says the next-generation G600 is generating great demand among customers.

“Thanks to our long-term strategic planning, the growth of Gulfstream Customer Support at Fort Worth Alliance Airport is allowing us to optimize completions at our Dallas Love Field facility and add the G600 to operations there,” Burns says. “Our world-class interior outfitters and artisans in Dallas will deliver the Gulfstream quality and excellence that has made our award-winning interiors the best in the business.”

From Dallas To Forth Worth

Gulfstream also performs completions for its G280 business jet model at the Dallas facility. In 2020, the firm announced plans to expand its Dallas service center to the Fort Worth Alliance Airport to help meet the needs of its growing customer fleet. In addition to adding roughly 160,000 square feet (14,864 square meters) of new maintenance, repair, and overhaul space, the Fort Worth facility will provide hangar space, back shops, and employee and customer offices.

Gulfstream also performs large-cabin completions at its Savannah and Appleton, Wisconsin, facilities. In February, Gulfstream announced the expansion and renovation of its completions operations at the Appleton plant.

You’ll find a huge selection of new and used Gulfstream aircraft for sale every day at Controller.com, including G500s and G600s.