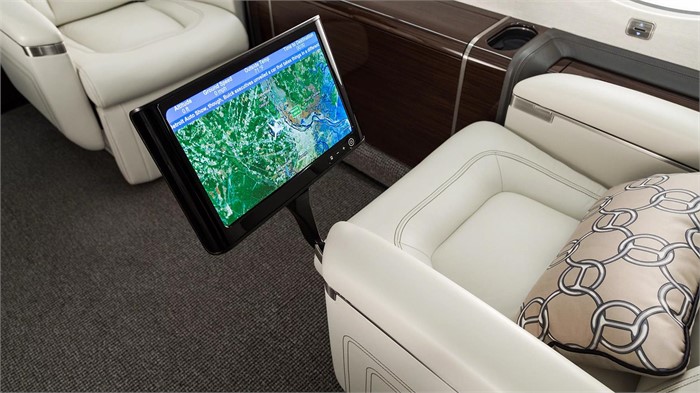 Business jet manufacturers spend a lot of time talking about the range and speed of their aircraft, but a business jet’s ability to keep its passengers working and productive is nearly as important as other factors on some trips. And these days, a key component of productivity is fast, reliable wireless internet connectivity, which allows executives to participate in video conferences, perform file transfers, and carry out other tasks. Gulfstream Aerospace recently announced it has surpassed 500 installations of the Inmarsat Jet ConneX in-flight connectivity platform, which allows for these tasks and more on its large-cabin aircraft.

Gulfstream says Jet ConneX is available on several of its aircraft, including G650, G650ER, G600, G500, and G700 jets. The service is also available as a retrofit option on in-service large-cabin Gulfstream models like the GIV, GV, G450, and G550. Inmarsat says 99% of G650s leave the factory with Jet ConneX installed, adding that coverage is available along all routes that international principals require.

Established in 1979, Inmarsat says based on its fully funded capacity roadmap, it will have a dozen satellites in orbit by 2023, making its global Ka-band satellite network “the most resilient and future-proof” in existence. Jet ConneX provides coverage over land and water during all flight phases, with transmission speeds reaching about 20 megabits per second. Inmarsat says coverage extending over the polar regions is coming soon. 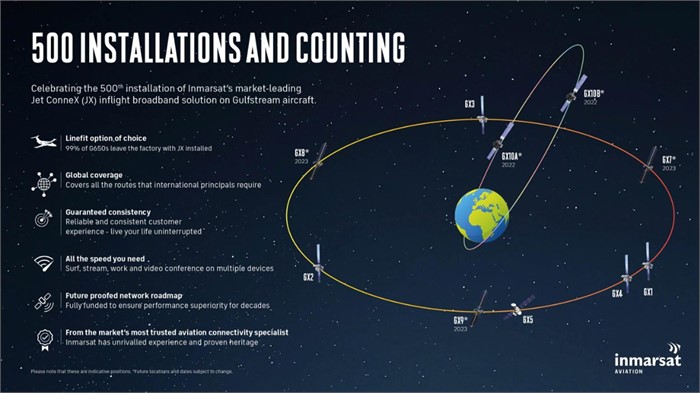 Productivity In The Sky

“Gulfstream owners expect a seamless transition from life on the ground to life on their aircraft, making connectivity essential,” says Gulfstream President Mark Burns. “This milestone illustrates our commitment to performance with high-speed connectivity and increased productivity, allowing our aircraft to truly be offices in the skies. As the industry leader in Jet ConneX installations, Gulfstream is dedicated to providing our customers with top-of-the-line products and services.”

Controller.com offers a diverse range of new and used Gulfstream aircraft for sale every day, including a number of GVs, G550s, G450s, G280s, and G200s.