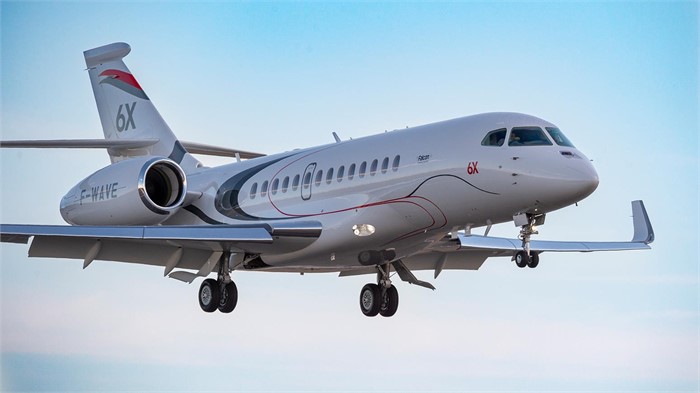 Dassault Aviation successfully completed the first flight of test aircraft No. 3 from the test program for its upcoming 16-passenger Falcon 6X business jet in late June. Dassault expects the Falcon 6X to receive type certification and be available for delivery next year. (Photo courtesy of Dassault Aviation.)

Dassault Aviation recently continued its push toward certification of its upcoming 16-passenger Falcon 6X business jet sometime next year by adding test aircraft No. 3 to the long-range jet’s test program. Equipped with a full interior, Falcon 6X s/n 003 successfully completed its maiden flight on June 24, flying two hours from Dassault’s final assembly plant near Bordeaux-Mérignac Airport in France to its flight test facility in Istres. Dassault will use the aircraft for cabin design validation.

Introduced in 2018, the Falcon 6X is billed as the first ultra-widebody business jet. Dassault unveiled the jet during a virtual ceremony in December and completed the first flight of test aircraft No. 1 in March, adding test aircraft No. 2 in May. The first two test aircraft have since logged more than 130 combined flight hours. Dassault is finishing work on test aircraft No. 4, which will include a full cabin interior and be used to conduct a two-month global endurance flight campaign to validate the maturity of all its systems. Test aircraft No. 10 was set to be ready for final assembly in early July.

“This latest flight is yet another sign of the smooth progress we have been making with the 6X test program,” says Dassault Aviation Chairman and CEO Eric Trappier. “We have been consistently impressed with the flight performance and handling of the 6X and the reliability of aircraft systems.”

The Falcon 6X has already won a 2020 International Yacht & Aviation Award for interior design and 2021 Red Dot: Best of the Best award for its premium cabin design. Dassault claims the 6X is the most spacious, advanced, and versatile twinjet in business aviation. Its cabin measures 6.5 feet (1.98 meters) high, 8.5 ft (2.59 m) wide, and 40.4 ft (12.31 m) long, and features 30 extra-large windows. Dassault will use test aircraft No. 3 to evaluate environmental features and temperature control and validate cabin acoustics systems. 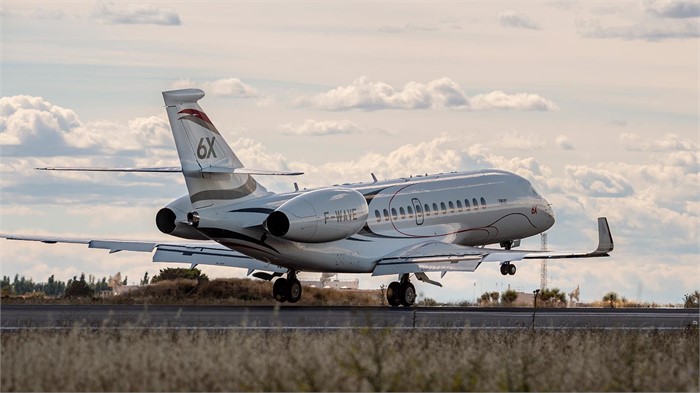 Dassault claims the 6X is the most spacious, advanced, and versatile twinjet in business aviation. (Photo courtesy of Dassault Aviation.)

“The 6X is shaping up to become one of our great success stories, a new benchmark in flying performance and comfort,” says Philippe Duchateau, Dassault chief test pilot. “It’s a real joy to fly.”

Controller.com offers a big selection of new and used Dassault Aviation business jets for sale every day, including Falcon 7X, 8X, 50, 900, and 2000 aircraft.