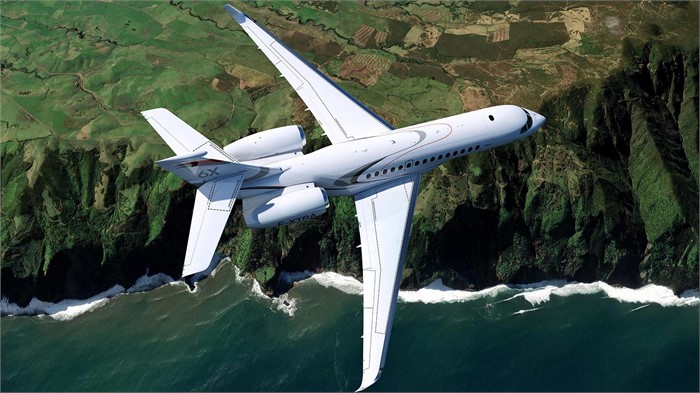 Dassault Aviation successfully completed the first flight of the second test aircraft in its Falcon 6X flight program in late April, taking another step toward entering the new 16-passenger twinjet into service sometime in 2022. Dassault Aviation CEO and Chairman Eric Trappier says both the firm’s first and second test aircraft are performing as expected and exhibiting a high level of systems maturity at this stage of the test program.

“Several of our test pilots have flown the Falcon 6X,” Trappier says. “All are extremely satisfied with its performance and handling characteristics.”

The first flight of the Falcon 6X occurred March 10 at Dassault Aviation’s Mérignac facility near the Bordeaux-Mérignac Airport in France. Pilots tested the response of the jet’s new-generation Pratt & Whitney PW812D engine. Similar to that flight, the first flight of test aircraft No.2 that occurred April 30 lasted about 2 hours and reached an altitude of roughly 40,000 feet (12,200 meters) and a cruise speed of Mach 0.80.

Test aircraft No.3 is to enter the test program by summer’s end, complete with a finished interior. Dassault Aviation will use it to test cabin systems and amenities, galley equipment, flight entertainment systems, and such options as high-speed Ka-band internet capability. After that, the first production aircraft will enter the test program completed to a typical customer configuration. Dassault Aviation plans to send that aircraft on a global demonstration tour.

The Falcon 6X will enter service with what Dassault Aviation claims will be the tallest and widest cabin in business aviation. The jet has already won a 2020 International Yacht & Aviation Award for design and a 2021 Red Dot Best of the Best award for its cabin design. The jet will also set new standards in performance, fuel efficiency, and sustainability, Dassault says. The Falcon 6X will provide a 5,500-nautical-mile (10,186-kilometer) range and top cruise speed of Mach 0.90.