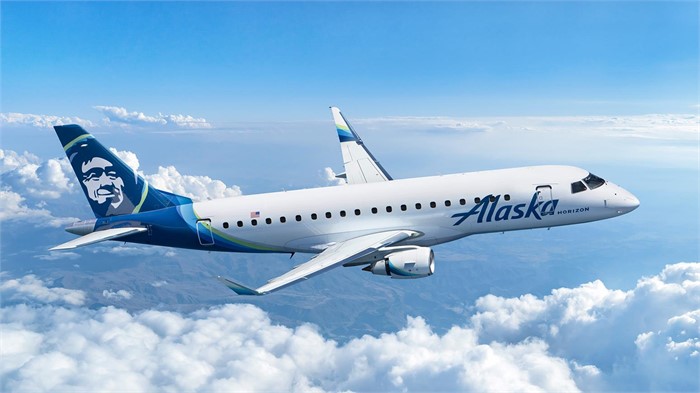 Embraer agreed this week to sell nine E175 commercial jets to Alaska Air Group to be operated by subsidiary and regional carrier Horizon Air. The deal is valued at $449.1 million, and the E175s will be delivered beginning next year in a 76-seat, three-class configuration featuring Alaska Airlines’ livery. Alaska Airlines currently has 62 Embraer E175s in its fleet, all of which are operated by Horizon Air and SkyWest Airlines. Alaska Air Group also announced it has committed to buy eight more E175 aircraft with SkyWest Airlines, which claims to be the world’s largest owner/operator of Embraer E175s.

“The E175 is a great aircraft for customers and has helped provide vital service throughout the pandemic,” says SkyWest President and CEO Chip Childs. “As we mark 10 years of partnership with Alaska Airlines, we are pleased to add these new E175s as we help lead the recovery and continue strengthening our Alaska partnership.”

As part of the new agreement, Horizon is converting nine options from an April 2016 purchase agreement to firm orders. Combined with three remaining firm orders on its backlog, Horizon will have 42 E175s in the fleet it operates for Alaska Airlines once all are delivered.

“Our customers love the comfort and convenience of the E175, especially their two-by-two layout, meaning no one has to sit in the middle seat,” says Horizon Air President and CEO Joe Sprague. “The size and efficiency of the E175 also allows us to boost flying in key markets, giving our customers more of the flexibility they crave.”

Mark Neely, Embraer commercial aviation vice president of sales and marketing for The Americas, describes the E175 as the backbone of the North American regional market, pointing to Embraer’s 85% share of the market’s 70- to 90-seat segment. “There are currently 588 E175s serving U.S. and Canadian carriers in cities across Canada, the USA, Mexico, and Central America,” he says.

Controller.com offers a big selection of new and used Embraer aircraft for sale every day.