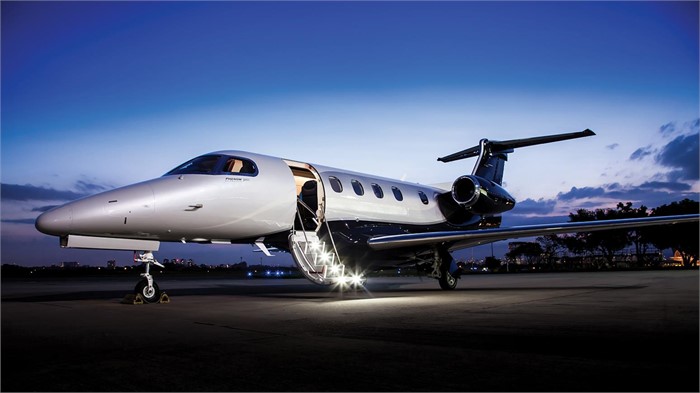 Embraer recently made the 600th delivery from its Phenom 300 light jet series, a Phenom 300E that went to Superior Capital Holdings, LLC. (Photo courtesy of Embraer.)

With its recent delivery of a Phenom 300E light jet to Superior Capital Holdings, LLC, of Fayetteville, Arkansas, Embraer has now delivered 600 aircraft from its Phenom 300 series. Launched in 2005, Phenom 300-series aircraft currently operate in more than 35 countries and have logged over 1.2 million flight hours. The Phenom 300E is the latest variant in the series, which the General Aviation Manufacturers Association (GAMA) says was the most-delivered twinjet for 2020, marking the ninth straight year the series has earned that distinction.

Embraer says Superior Capital Holdings plans to use its Phenom 300E to support its business operations throughout the United States. The firm is a first-time jet buyer that previously operated a single-engine turboprop but upgraded to the Phenom 300E for greater speed, comfort, and safety during frequent trips across more than 1,000 nautical miles (1,852 kilometers).

“We are honored to reach this milestone, as the popularity and continued success of the Phenom 300 series is a direct reflection of our commitment to providing the ultimate customer experience in business aviation,” says Embraer Executive Jets President and CEO Michael Amalfitano. “This best-in-class aircraft continues to outperform in the light jet segment with its speed, range, comfort, and technology solidifying the Phenom 300 series’ global leadership position in the industry.”

Embraer announced the Phenom 300E in January 2020 and the first delivery occurred in June. Billed as the fastest single-pilot jet in production by virtue of its Mach 0.80 speed, the Phenom 300E has a five-occupant flight range of 2,010 nm (3,722 km) with National Business Aircraft Association (NBAA) Instrument Flight Rules (IFR) reserves.

The jet is equipped with a Prodigy Touch flight deck and two Pratt & Whitney Canada PW535E1 engines, and has a maximum flight altitude of 45,000 feet (13,716 meters). Embraer claims the Phenom 300E has the largest windows, best cabin pressurization, and best climb performance in its class.

Controller.com offers a big selection of new and used Embraer aircraft for sale every day, including business jets like Phenoms.