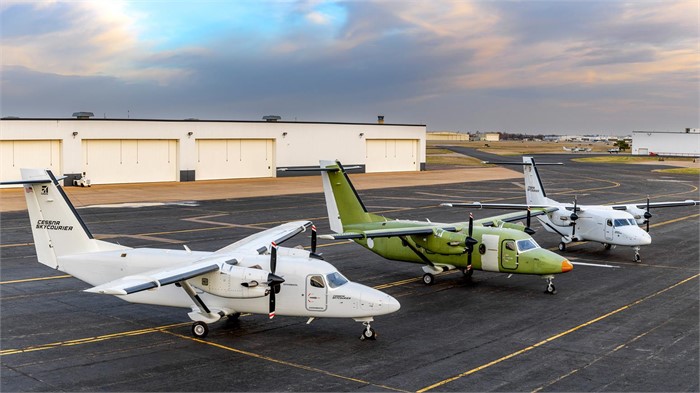 The Cessna SkyCourier has begun the certification flight test phase for the high-wing, large utility aircraft. FAA certification and first deliveries are expected for later this year. (Photo courtesy of Textron Aviation.)

Textron Aviation recently announced that its Cessna SkyCourier large, high-wing utility aircraft program has begun its certification flight test phase. Each major achievement allows members of the flight test program to gain understanding of the aircraft’s strength, capabilities, and durability, the company says. Combined, the three aircraft that make up the SkyCourier test fleet have completed over 700 test hours. The program now moves toward FAA certification and first deliveries, which are expected to begin later this year. To date, the SkyCourier has accomplished envelope expansion to all corners of the speed, altitude, and structural design, as well as extreme hot- and cold-weather testing, bird strike testing, certification of the Pratt & Whitney Canada PT6A-65SC engine through Transport Canada Civil Aviation (TCCA), and natural icing certification.

The Cessna SkyCourier aircraft offers two configurations with a common platform: the first is a freighter with a 6,000-pound (2,270-kilogram) payload, and the second a 19-seat passenger option. The aircraft includes standard single-point pressure refueling along with a rugged landing gear. It also comes with the Garmin G1000 NXi avionics suite and has a maximum cruise speed of up to 200 ktas and a maximum range of 900 nautical miles (1,666 kilometers). The aircraft is 54 feet 10 inches (16.71 meters) in length and has a 72-ft (21.95-m) wingspan.

“The SkyCourier was designed to fulfill a need in the marketplace for a flexible, reliable, high-utilization aircraft for customers around the world, and its versatility makes it a great fit for a wide range of operations,” says Chris Hearne, senior vice president, Engineering & Programs. “The aircraft has performed exceptionally well through every phase of testing, and we’re pleased by its progress. With the start of the certification flight test phase, we are entering one of the most important phases of the SkyCourier program, and I’m confident in our highly skilled team and the outstanding abilities of this aircraft.”

You’ll find a large selection of Cessna aircraft for sale every day on Controller.com, including single- and twin-engine piston aircraft, turboprops, and jets.