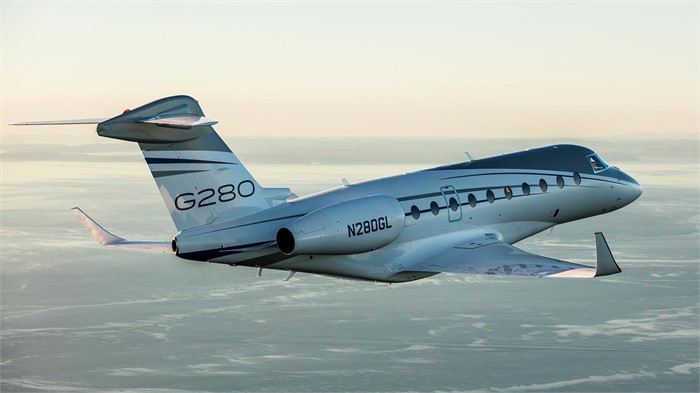 Gulfstream announced in early March that its twin-engine G280 super-midsized jet has been certified by the FAA to meet intensified noise standards classified as Stage 5, thus ensuring its ongoing operation at noise-sensitive airports and those with time-of-day restrictions. (Photo courtesy of Gulfstream.)

Gulfstream Aerospace announced recently that its 10-passenger Gulfstream G280 super-midsized jet has been certified as meeting the intensified noise standards that the Federal Aviation Administration (FAA) classifies as Stage 5. Gulfstream says Stage 5 approval “ensures continued operational flexibility at noise-sensitive airports and those with time-of-day entry restrictions.” Although the FAA approval is a recent development, the twin-engine G280 has always fallen below Stage 5 classified levels.

Being A Good Neighbor

The FAA says Stage 5 is the current FAA noise standard for jet and large turboprop aircraft. The standard went into effect on December 31, 2020 and applies to certain aircraft with a maximum take-off weight of 121,254 pounds (55,000 kilograms) or less. Noise certification standards in general ensure that the “latest safe and airworthy noise reduction technology is incorporated into aircraft design and enables the reductions in noise experienced by communities,” the FAA says. Gulfstream has reflected the update in the G280 flight manual, and issued new noise data sheets to operators.

“The Gulfstream team continues its commitment to the future of the G280 program, ensuring adherence to the most stringent standards, whether for safety, performance, or noise emissions,” says Gulfstream President Mark Burns. “Aircraft noise abatement goals are vital to ensuring the livelihood of the aviation and aerospace industries and demonstrating our efforts to be good neighbors to those who live or work near airfields, airports, or flight paths.”

Gulfstream began deliveries of the G280 in 2012 and says it entered the 200th G280 into service last year. The jet uses two Honeywell HTF7250G engines that each produce 7,624 pounds of takeoff thrust. The business jet is certified for steep-approach operations and short-field takeoff and landing performance. It has a 3,600-nautical-mile (6,667-kilometer) flight range, a maximum speed of Mach 0.85, and a max cruise altitude of 45,000 feet (13,716 meters). Gulfstream equips the G280 with its Gulfstream PlaneView280 flight deck, an Enhanced Flight Vision System, and a Synthetic Vision-Primary Display.

If you’re in the market for new or used Gulfstream aircraft, you’ll find a big selection for sale every day on Controller.com, including a number of G280s.