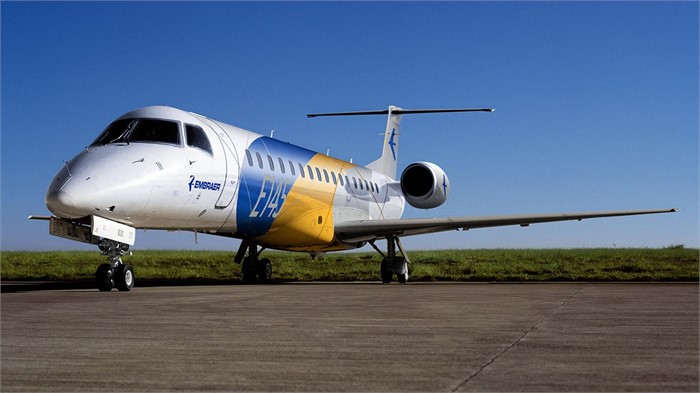 Embraer recently announced it will install high-efficiency particulate air (HEPA) filters on its ERJ 145 jets to help prevent potential transmission of viruses among passengers. The first kits are expected to be sent out by mid-December. (Photo courtesy of Embraer.)

Embraer recently announced it will install high-efficiency particulate air (HEPA) filters on its 50-seat ERJ 145 jets to help prevent potential transmission of viruses among passengers. The first 70 kits for aircraft are currently being assembled and are scheduled for delivery by mid-December. HEPA filters can capture 99.97% of airborne particles and biological contaminants like bacteria, viruses, and fungi and are already standard on all versions of Embraer E-Jets and E-Jets E2 commercial aircraft, the company says. They are also standard equipment on the Praetor 500 and Praetor 600. Embraer also notes that in most aircraft, cabin air is completely refreshed between 20 and 30 times per hour, more than an office building and even five to six times more frequently than in a hospital.

The company spent five and a half months developing HEPA kits for the ERJ 145, selecting the filter, creating the service bulletin, and manufacturing and purchasing required parts. Embraer plans to create similar kits for the ERJ 135 and ERJ 140 in the near future. The filter kits are the latest effort to create a safer environment in the cabin. Embraer approved the use of MicroShield360, a preventative coating system that continuously inhibits growth of microbes, in its aircraft cabins earlier this year.

“At Embraer, we are always focused on our customer, on how to better support them and how to further improve our products,” says Embraer Services & Support President and CEO Johann Bordais. “Given the moment we are living, developing a HEPA filter service bulletin for the ERJ 145 is a must-have solution Embraer developed for making cabin conditions even safer for passengers.”

You’ll find a big selection of new and used Embraer aircraft, including the ERJ 145, for sale every day at Controller.com.