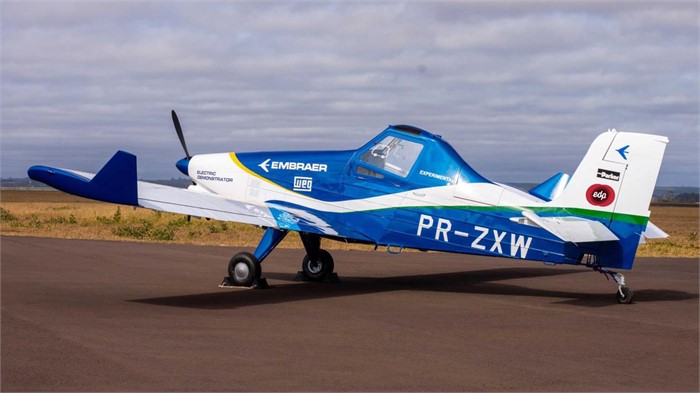 Embraer and energy company EDP are partnering on a project to advance energy storage and battery-charging technologies for use in an all-electric demonstrator aircraft based on the Embraer EMB-203 Ipanema. (Photo courtesy of Embraer.)

Brazilian aircraft manufacturer Embraer and Portuguese energy company EDP announced in late November they’ve formed a partnership that aims to advance energy storage and battery-charging technologies for aviation uses. Through its EDP Smart division, EDP will help Embraer explore the use of an energy storage and recharge system for an all-electric demonstrator aircraft Embraer has been developing using an Embraer EMB-203 Ipanema aircraft as a test bed. The first test flight of the prototype electric aircraft in development is planned for 2021.

Embraer and EDP plan to explore the applicability of using high-voltage batteries for the electric propulsion systems of small aircraft. They’ll also evaluate such main operating characteristics as weight, efficiency and power quality, thermal control and management, cycling loading and unloading, and operational safety. Primary assessments are being done on the single-engine Ipanema, and ground tests are taking place at Embraer facilities in Botucatu ahead of the aircraft’s first flight, which will occur at Embraer’s Gavião Peixoto facility.

Embraer’s aviation electrification project is part of its efforts and others in the aeronautical sector to meet environmental sustainability commitments, including goals to reduce carbon emissions. The partnership with EDP aligns two large companies that share sustainability goals, Embraer says. EDP, for example, aims to electrify 100% of its ground vehicle fleet in Brazil by 2030. The company operates six hydroelectric generation units and one thermoelectric generation unit among its overall operations.

You’ll find a big selection of new and used Embraer aircraft for sale every day on Controller.com, including Embraer business jets like the Legacy, Lineage, and Phenom.