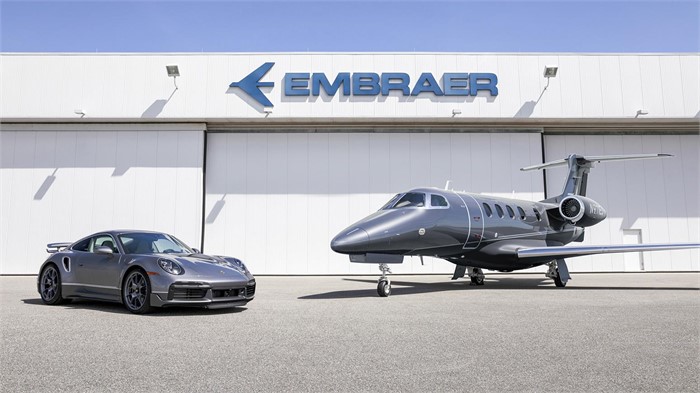 If you’ve ever dreamed of stepping directly out of your own luxury sportscar straight into your own luxury executive jet, or vice versa, Embraer and Porsche have a deal for you. The companies have announced they will make 10 limited-edition Duet packages available for 2021 deliveries. Each package features a custom Embraer Phenom 300E light jet and Porsche 911 Turbo S designed in tandem. Along with a shared exterior platinum silver metallic and jet grey color scheme, for example, the Phenom’s seats mimic the sew style of the 911 Turbo S’, while the 911’s steering wheel design patterns the Phenom’s yoke. Buyers must purchase the vehicles together, and they’ll also receive a custom Duet logo luggage set and special-edition Porsche Design 1919 Globe timer UTC titanium-case watch influenced by the Phenom’s cockpit.

Embraer says the Phenom 300E is the world’s fastest and longest-range single-pilot business jet, while the Porsche 911 is the heart of Porsche’s product portfolio. Embraer Executive Jets CEO and President Michael Amalfitano says, “In the spirit of delivering the ultimate customer experience, we are fusing two of the most notable brands in the aerospace and automotive industries, bringing together the pinnacle in production sports cars with the market benchmark in light jets, once again proving that we don’t simply follow trends—we create them.” 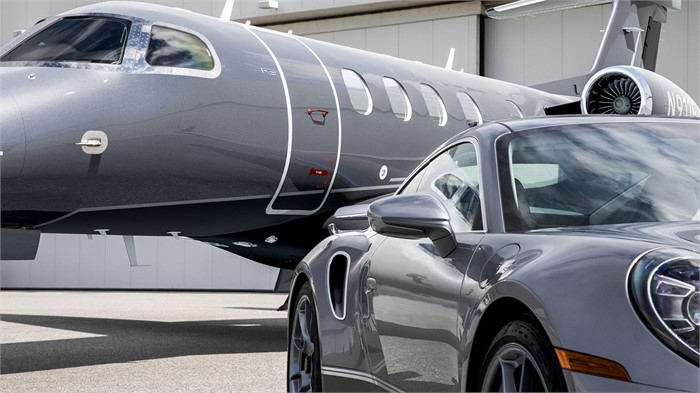 The Phenom 300E and 911 Turbo S in the exclusive, limited-edition Duet package share the same exterior paint pallet and general scheme, as well as matching Brilliant Chrome air intakes on the car and leading-edge nacelles on the light jet. (Photo courtesy of Embraer.)

Alexander Fabig, Porsche AG vice president individualization and classic, says the effort presents vehicles equally attractive to jet and sports car owners. The companies’ cooperation is reflected in an exclusive logo described as uniting the aeronautical requirement of lift the Phenom 300E winglet depicts with the automotive requirement of downforce the 911 depicts. As such, the logo is embossed on the Phenom’s seat headrests and debossed on the 911’s headrests. Elsewhere, each Duet pair will also include a special badge denoting that only 10 pairs will be delivered that owners can choose where to position.

Controller.com offers for-sale listings for a big selection of new and used Embraer aircraft every day, including a number of Phenoms like 300Es.