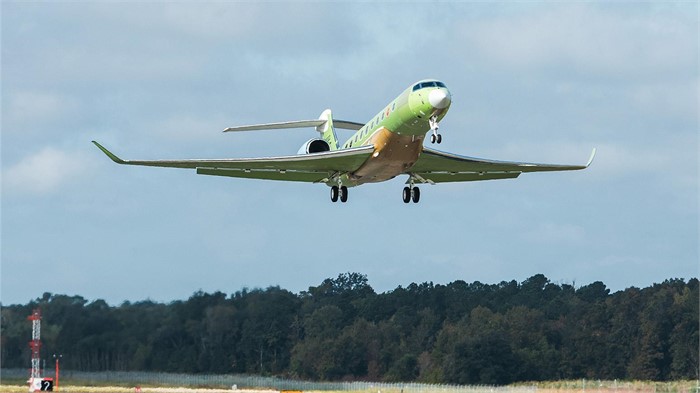 Gulfstream successfully flew the fifth of its G700 test aircraft on October 23. President Mark Burns says the company is “steadily increasing flights, flight hours, and the completion of numerous company tests, further raising the bar for business aviation around the world.” (Photo courtesy of Gulfstream.)

“The G700 flight-test program is progressing exceptionally well,” says Gulfstream President Mark Burns. “Every day, we come closer to our goal of delivering this revolutionary aircraft to our customers. We are steadily increasing flights, flight hours and the completion of numerous company tests, further raising the bar for business aviation around the world.”

Gulfstream introduced the G700 in October 2019; the aerospace company says it is “the most spacious jet in the industry with the longest range at the fastest speeds.” The G700 is equipped with Rolls-Royce Pearl 700 engines, and at a long-range cruise speed of Mach 0.85 has a flight range of 7,500 nautical miles (13,890 kilometers). The jet recently won a 2020 International Yacht & Aviation Award for its G700 Classic Seat, and features up to five living areas, Gulfstream’s Symmetry Flight Deck and Predictive Landing Performance System, and the “most extensive use of touchscreen technology in business aviation.”

Controller.com offers for-sale listings for a large selection of new and used Gulfstream aircraft, including G450s, G500s, and G550s.