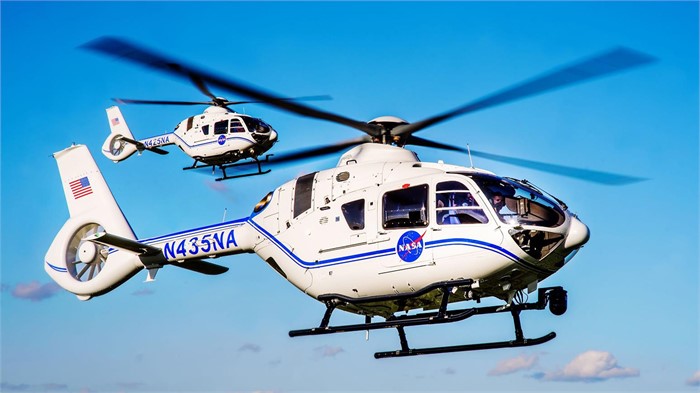 Airbus Helicopters recently delivered two H135 helicopters to NASA and will deliver a third early next year. The H135s are stationed at the Kennedy Space Center in Florida, where they’ll support a variety of missions. (Photo courtesy of Airbus.)

Airbus has delivered two of its H135 light twin-engine turbine helicopters and is scheduled to deliver a third next year to the National Aeronautics and Space Administration (NASA). The H135s will serve a number of roles, including aerial security, emergency medical, research, passenger transport, and other missions. Delivered from Airbus’ production and completion center in Mississippi, the choppers are stationed at the Kennedy Space Center in Florida. NASA has also signed a 10-year $15 million support contract that will see Airbus Helicopters supporting NASA’s H135 fleet with two onsite pilots and mechanics, as well as an Airbus program manager.

“As NASA looked to renew its aging fleet of helicopters, the H135 was selected due to its performance, capabilities and ability to meet our needs as we look to the future of manned space launch,” says NASA’s David Ramsey, chief of flight operations at the Kennedy Space Center. “We are very pleased to now welcome it to our fleet. For years to come, these helicopters will not only support security and routine missions at the Kennedy Space Center, but also support our astronauts and crew as they launch important missions to the ISS, the moon and beyond.”

This month, one H135 will escort SpaceX Crew Dragon members to the 39A launch pad for departure on a six-month expedition to the ISS. The H135s will also factor into preparations and execution of the Artemis expedition scheduled to land the first woman on the moon by 2024.

“Working with NASA is something that many of us – including myself – have dreamed of since we were kids, and we stand ready to fully support their new H135s as they support furthering space exploration,” says Airbus Helicopters President Romain Trapp. “Building a helicopter that helps NASA drive critical advances in science and aerospace technology is truly an honor and privilege.”

You’ll find a big selection of new and used Airbus aircraft for sale every day on Controller.com, including dozens of Airbus helicopters like the H135.