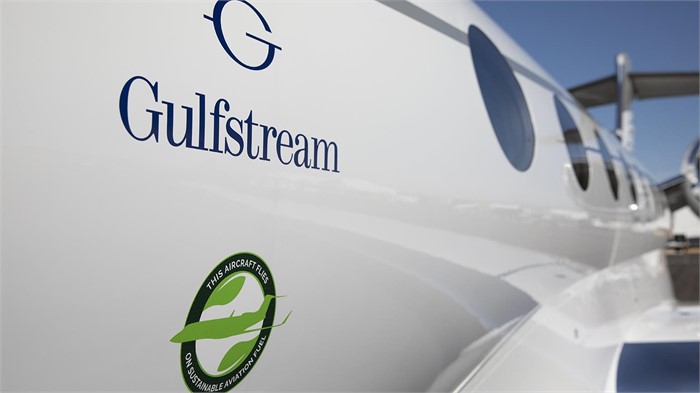 Business jet manufacturer Gulfstream Aerospace has extended a purchase agreement contract it inked in 2015 to receive sustainable aviation fuel (SAF) from distributor World Fuel Services as produced by World Energy. Gulfstream has used SAF since 2016 for its own fleet of corporate, demonstration, completion, customer support, and flight test aircraft based in Savannah, Georgia. The company also makes SAF available to its customers at two of its California service centers, and says SAF has provided at least a 60% smaller carbon footprint per gallon than conventional jet fuel on a lifecycle basis.

World Energy produces its renewable SAF fuel at its refinery in Paramount, California, based on feedstock from agricultural waste, fats, and oils. World Fuel Services distributes SAF to Gulfstream to locations on both U.S. coasts. Gulfstream has used a SAF-JET A fuel blend to support more than 650 flights spanning more than 1.3 million nautical miles since 2016. The company claims to have reduced carbon dioxide emissions by about 1,874 tons (1,700 metric tons). “The innovative partnership between Gulfstream and World Energy paved the way for a larger sustainability movement,” Burns says.

As Gulfstream points out, its sustainable fuel efforts support industry goals established by the National Business Aviation Association in conjunction with the General Aviation Manufacturers Association and International Business Aviation Council. The organizations’ goals include cutting CO2 emissions in half by 2050 relative to 2005 levels, reaching a 2% improvement in fuel efficiency per year from 2010 to 2020, and achieving carbon-neutral growth from 2020 onward.

Controller.com is the aviation industry’s home to a huge selection of new and used jet aircraft for sale every day, including such Gulfstream models as the G550, G450, an G280.