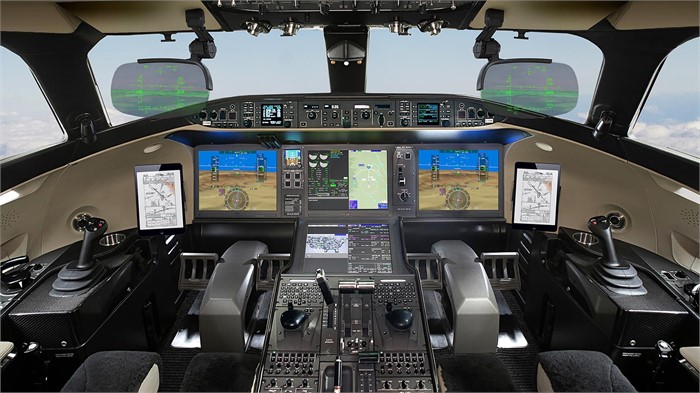 Bombardier this week delivered its first Global 7500 business jet to feature a dual HUD (head-up display). The addition translates to greater co-pilot contributions during operations that the HUD assists in, Bombardier says. It also means easier switching between pilot flying and pilot monitoring and redundancy during low-visibility approaches. Bombardier Senior Vice President of Program Management and Engineering Michel Ouellette says the key distinction is that the Global 7500’s cockpit puts “technology and automation at the service of the crew, rather than creating technology that the crew has to manage.”

Two HUDs Are Better Than One

The Global 7500’s HUD taps into Enhanced and Synthetic vision systems that enhance a pilot’s situational awareness. Bombardier says adding a second HUD builds on these abilities, adding even more safety and redundancy to “what is already the most advanced and pilot-friendly cockpit in business aviation.” In service roughly 18 months now, the Global 7500 is equipped with the latest version of the Bombardier Vision flight deck, which Bombardier says provides such automation implementations as automatic fuel transfer and cabin pressurization management, as well as simplified startup sequences compared to other business jets. The jet also provides automated self-diagnostic electronic checklists.

Bombardier says the Global 7500 is the business jet industry’s flagship, providing the longest range, smoothest ride, and most spacious cabin, the latter of which provides up to four living spaces. With eight passengers onboard, the jet has a long-range capability of 7,700 nautical miles (14,260 kilometers), but it can accommodate up to 19 passengers. The aircraft’s top speed is Mach 0.925.