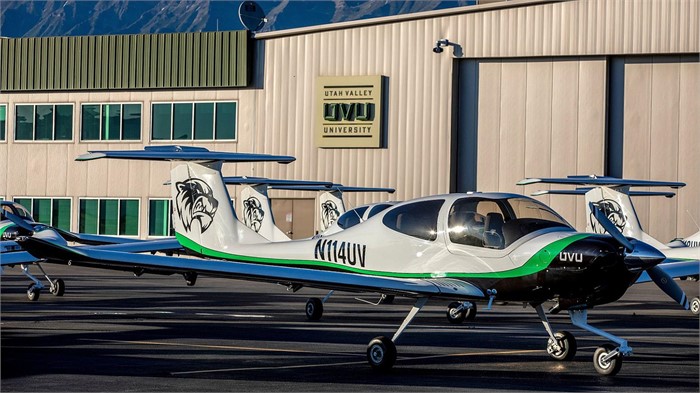 The Utah Valley University School of Aviation Sciences has a relationship with Diamond Aircraft that goes back to 1996, when university student pilots began using DA20 aircraft for training. In mid-July, the two parties announced that UVU has expanded its flight training fleet with nine of Diamond’s four-seat DA40 XLT single-engine piston airplanes bearing UVU’s colors and logo.

The school values the DA40 for its ability to complete both a student’s visual flight rules (VFR) and instrument flight rules (IFR) training, tasks that in some cases can require separate aircraft. This makes “it easier for our maintenance department to control fleet availability,” says Alan Dennis, UVU Aviation Sciences’ chief flight instructor. “It also curbs the learning curve when our students progress from private pilot to instrument training.”

As both Diamond and UVU officials note, the DA40 XLT’s four seats enable students to ride in the back seat and observe other students, which decreases overall training time. “Operating all four-place aircraft allows for student observers to go along on almost any flight, giving them the opportunity to learn by watching another student and instructor without any pressure on them to perform,” says Dan Sutliff, UVU faculty lead for flight training.

You’ll find a wide selection of new and used single-engine piston aircraft for sale every day on Controller.com, including Diamond Aircraft models like DA40s and DA20s.