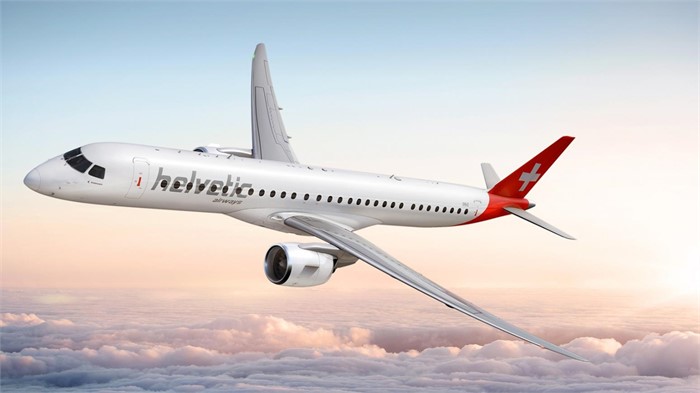 Swiss carrier Helvetic Airways recently converted four of the E190-E2 aircraft it has ordered from Embraer to E-195-E2 planes. (Photo courtesy of Embraer.)

In 2018, Switzerland’s Helvetic Airways placed a firm order with Embraer for 12 Embraer E190-E2 commercial planes as part of the carrier’s fleet-renewal program. Helvetic, which has received five of the E190s so far, also placed an order for another dozen E-190-E2s (for a total of 24 aircraft on order), but with conversion rights to Embraer’s second-generation E195-E2 model. On July 15, Helvetic Airways committed to converting four E190-E2s from its original order to E-195-E2s.

More Than A Billion Dollars

Embraer says it’s on pace to deliver Helvetic Airways its seven remaining aircraft, including the four E195-E2 conversions, by 2021’s end, with most coming in first half of next year. The remaining seven aircraft are collectively valued at $480 million. With all purchase rights exercised, the deal is worth $1.25 billion. Overall, Embraer says it has taken 1,900-plus orders from more than 100 customers for E-Jets aircraft over the last two decades.

Helvetic Airways plans to equip its E195-E2s with 134 seats in a single-class configuration. Besides greater capacity, the E195-E2 burns 10% less fuel per flight, emits 30% less carbon dioxide per passenger, and is 48% quieter than the first-gen E190s Helvetic is replacing in its fleet, Embraer says.

Noting that the E195-E2 strikes a good balance between seating capacity, range, fuel consumption, and environmentally friendly operation, Helvetic Airways CEO Tobias Pogorevc says with between 120 and 150 seats, the E195-E2 “has virtually no competition in the regional aircraft segment.”

Embraer also manufactures Phenom, Legacy, and Lineage business jets, all of which you’ll find for sale every day on Controller.com.