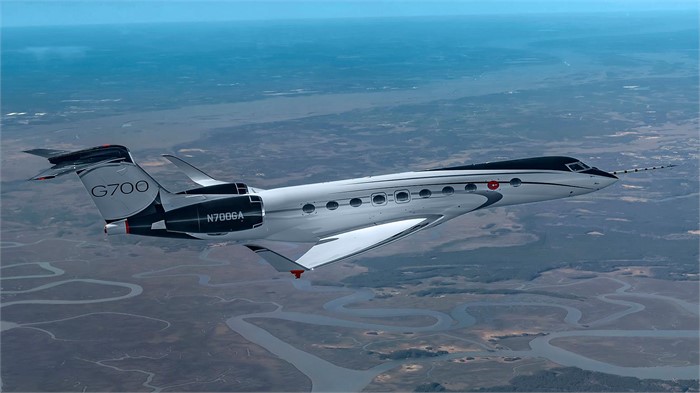 During the more than 100 flight tests that Gulfstream’s all-new G700 has made since February, the aircraft has topped its typical maximum speed of Mach 0.925 and cruise altitude of 51,000 feet by reaching Mach 0.99 and 54,000 feet, respectively. (Photo courtesy of Gulfstream.)

Gulfstream first flew its upcoming G700 business jet—billed as “the most spacious jet in the industry with the longest range at the fastest speeds”—in February, officially launching what it promised would be a “rigorous” flight-test program for the 19-passenger aircraft. In late July, the company announced that the all-new “industry flagship” had charted 100-plus test flights and recently finished up company flutter testing. The aerospace firm also says the jet has surpassed its maximum operation speed (Mach 0.925) and cruise altitude (51,000 feet; 15,545 meters) during the tests, hitting Mach 0.99 and reaching 54,000 ft. (16,459 m), respectively.

Gulfstream President Mark Burns says the flight test accomplishments made at this early stage speaks to the G700 program’s impressive maturity. “We designed and developed the G700 for our customers to fly safely, securely, and efficiently while enjoying the same level of comfort as they do on the ground,” he says. “With the largest galley in the industry, the utmost in technology, and the finest, freshest cabin environment, the G700 unlocks new opportunities in business-jet travel.”

Controller.com is your go-to source for new and used business jets for sale every day, including popular Gulfstream aircraft like G200s, G280s, G450s, G550s, and G650ERs.