Embraer’s midsize Praetor 500 and super-midsized Praetor 600 business jets are receiving several cabin enhancements that the Brazilian manufacturer says positions the platform as the “best cabin environment among all medium jets.” Besides making a HEPA (high-efficiency particulate air) filter now included standard on all Praetor aircraft, Embraer has also tested and received approval to use MicroShield360, a preventative interior surface coating system that impedes the growth of microbes. Embraer has also received certification in June from Brazil’s National Civil Aviation Agency, or ANAC, and validation from the European Union Aviation Safety Agency and Federal Aviation Administration for an electric lavatory pocket door it developed.

Embraer says the electric lavatory pocket door is the only one in the midsize and super-midsize categories, and the Praetor 500 and 600 are the only aircraft in the medium cabin segment to now include an emergency exit door in the lavatory. Designed to enhance cabin safety and cleanliness, the optional feature enables passengers to open the door by pressing a button. The feature is available for new Praetor jets and existing Praetor and Legacy 450 and 500 models as a retrofit beginning in 4Q 2020. Embraer Executive Jets President and CEO Michael Amalfitano says the door’s certification means “the Praetors combine the cleanest cabin environment and compliance with the most stringent operational requirements, such as Part 135.” 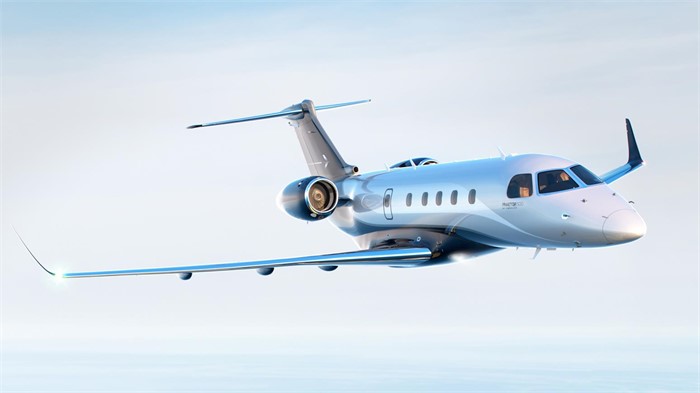 In addition to providing an option for a new electric lavatory pocket door in its Praetor 500 and 600 executive jets, the company is making a HEPA filter a standard inclusion with all Praetor aircraft. (Photo courtesy of Embraer.)

The Praetor 500 and 600 provide what Embraer says is the lowest cabin altitude—5,800 feet (1,767.8 meters) when flying at 45,000 ft. (13,716 m)—in their classes. Both jets can also move 100% fresh air throughout the cabin. The HEPA filter inclusion, however, further enhances cabin air quality by capturing 99.97% of bacteria, viruses, fungi, and other particles, Embraer says. Amalfitano says in relation to the COVID-19 pandemic, integrating new health and safety technologies is “paramount.”

Embraer based the Praetor platform on its Legacy 450 and 600 models, and says there are now 160-plus Praetor jets in service that have logged more than 180,000 flight hours.

Controller.com has a huge selection of new and used business jets for sale every day, including Embraer models like Legacy and Phenom aircraft.