Despite “upheaval” due to COVID-19, Dassault Aviation says it’s making steady progress toward completing the maiden flight of its upcoming twin-engine Falcon 6X executive jet in 2021 as originally planned. Getting the 6X to market on schedule is a top priority, says Dassault Aviation CEO and Chairman Eric Trappier, who points to suppliers’ “extraordinary efforts” and diligent and resourceful work from production staff as keeping the program “running smoothly.”

Introduced in 2018, the 16-passenger Falcon 6X is scheduled for certification and service entry in 2022. Dassault says it will have a maximum range of 5,500 nautical miles at Mach 0.80, and will be the “most spacious, advanced, and versatile twinjet in business aviation.” The 6X’s cabin offers 6.5 feet (1.98 meters) of headroom and measures 8.5 feet (2.6 m) wide.

To date, Dassault has powered up and begun ground testing on the first of three preproduction aircraft. The other two are in advanced stages of assembly, and long-cycle parts production for serialized production has also begun. Ultimately, each test aircraft will be able to perform aerodynamic, performance, and systems testing, and Aircraft No. 1 will have a full interior to evaluate various systems for functionality, acoustics, airflow, comfort, and more. Dassault also says it has completed electric, hydraulic, and fuel system tests, and started testing on the jet’s digital flight control system and for ground fatigue and damage tolerance. 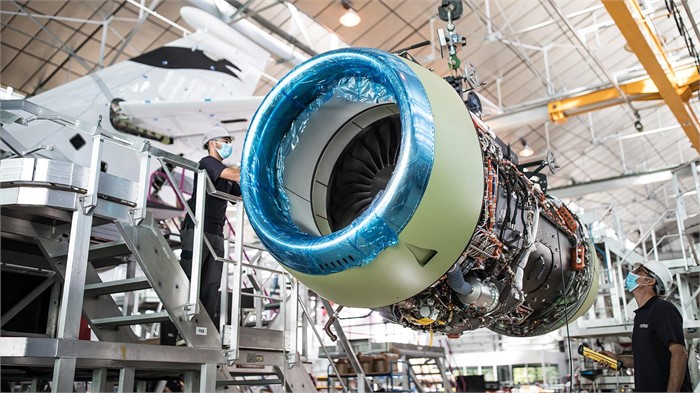 Dassault expects for the Falcon 6X to receive type certification in 2022 and to enter service that same year. (Photo courtesy of Dassault Aviation.)

Earlier this year, Dassault completed an initial airborne test campaign on the Falcon 6X’s Pratt & Whitney Canada PW812D engine, and it has a second test round scheduled this summer. The PW812D has logged 200-plus air and more than 1,600 ground test hours, and has completed initial certification tests for bird strikes, ice ingestion, and blade-off tests.

Controller.com is your go-to source for new and used business jets for sale every day, including Dassault business jets like the manufacturer's Falcon 7X, 8X, 50, 900, and 2000 aircraft.