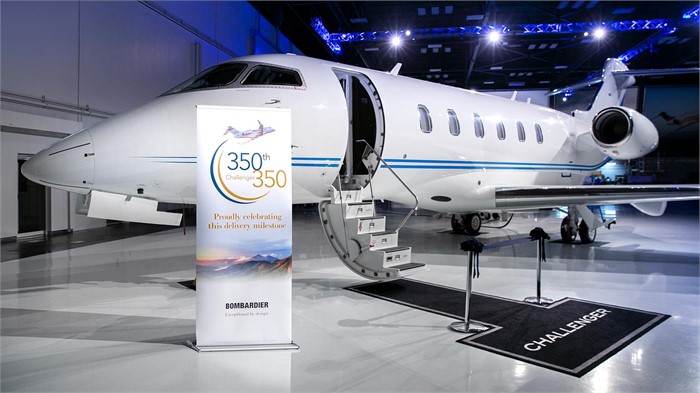 Bombardier recently reported it delivered the 350th unit of its 10-passenger Challenger 350 business jet, which entered service in 2014 as an upgrade to the Challenger 300. (Photo courtesy of Bombardier.)

Bombardier has earned numerous accolades and enjoyed great success since launching its 10-passenger Challenger 350 business jet in 2013 and entering it into service in 2014. That success continues with a recent announcement from the business jet manufacturer that it has delivered the 350th Challenger 350 aircraft—a feat that coincides with the Challenger 350 completing its sixth consecutive year as the industry’s most-delivered super midsize jet and grabbing a 43% market share for 2019. Bombardier says the Challenger 350 has reached this milestone more quickly than any other offering in the medium and large business jet categories.

Featuring what Bombardier says is the largest cabin in its class, the Challenger 350 has a seats-full, tanks-full 3,200-nautical-mile (5,926-kilometer) flight range—good enough to connect New York City to London. The jet’s Honeywell HTF7350 engines help give it a top speed of Mach 0.83. Recent updates have included a performance improvement package that enables the jet to fly 1,500 nm (2,778 km farther from short runways and certifications for steep approaches. Other enhancements have included availability for a compact head-up display and Enhanced Vision System, cabin soundproofing, and new cockpit aesthetics.

Controller.com has a sizeable selection of new and used Bombardier aircraft for sale every day, including Challenger models like 350s and 300s.