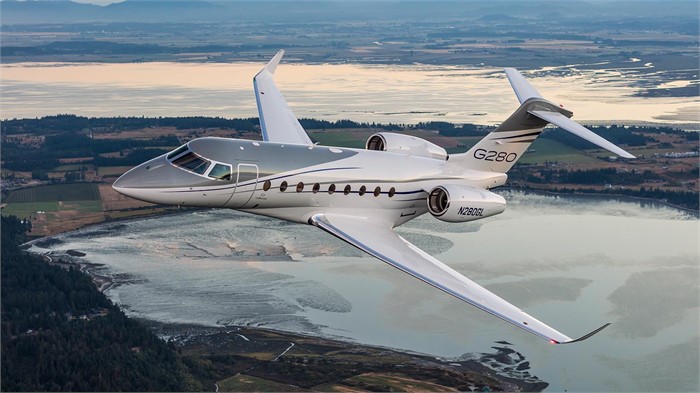 Although approval is still pending with the U.S. National Aeronautic Association, Gulfstream recently reported that its super-midsize G280 business jet set a 75th city-speed record in February flying from Vermont to London. (Photo courtesy of Gulfstream.)

Gulfstream’s super-midsize G280 executive jet has set 75 city-pair speed records since it was introduced in the early 2010s. The latest record came February 16 after the jet completed a 2,735-nautical-mile (5,065-kilometer) flight from Burlington International Airport in Vermont to London City Airport in England, where it also exhibited its steep-approach landing ability due to the airport’s short runway. While approval of the record-setting jaunt is still pending, the flight took 6 hours and 10 minutes at an average speed of Mach 0.83.

Gulfstream President Mark Burns said the G280’s ability to provide operators with range, fuel efficiency, and performance, especially on short runways, “reinforces its place atop the super-midsize class.” The G280’s most recent city-pair speed records, he says, are further proof of its “superior performance capabilities bolstered by its advanced wing, robust airframe, and powerful engines.” Prior to this latest record, the G280 set another record in January flying from Kahului, Hawaii, to Phoenix, Arizona, completing the 2,515-nm (4,658-km) flight in 4 hours and 57 minutes at an average cruise speed of Mach 0.83.

The G280 is equipped with two Honeywell HTF7250G engines, an Enhanced Flight Vision System, a Synthetic Vision-Primary Flight Display, and the PlaneView280 flight deck. It provides up to two living areas, can seat up to 10 passengers, and has a top speed of Mach 0.85 and a maximum range of 3,600 nm (6,667 km)—enough to fly from New York City to London nonstop. Gulfstream says there are nearly 200 G280s in service around the world.

Controller.com is the industry’s leading source for new and used business jets for sale every day, including Gulfstream executive aircraft models like G280s.